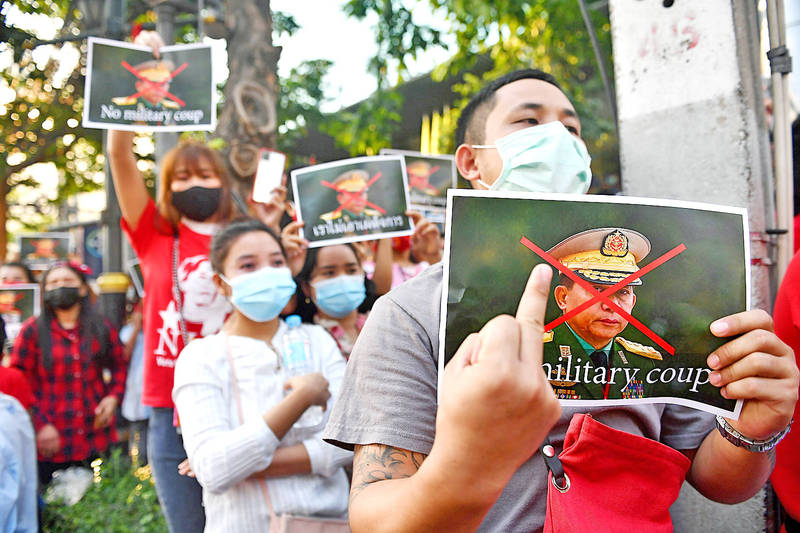 Burmese migrants hold up posters of Myanmar Commander-in-Chief of the Defence Services Min Aung Hlaing as they take part in a demonstration outside the Myanmar embassy in Bangkok yesterday. Photo: AFP

The intervention ended a decade of civilian rule in Myanmar, with the military justifying its power grab by alleging fraud in the November elections that Aung San Suu Kyi’s National League for Democracy （NLD） party won in a landslide.

“Commander-in-Chief of the Defence Services Min Aung Hlaing is now in power of the State for the duration of the state of emergency, while Vice President Myint Swe will now serve temporarily as President,” the Myanmar Times wrote on Twitter.

Aung San Suu Kyi and Myanmar President Win Myint were detained in the capital, Naypyidaw, before dawn, party spokesman Myo Nyunt said, just hours before parliament was meant to reconvene for the first time since the elections.

The military sealed off roads around the capital with armed troops, trucks and armored personnel carriers. Military helicopters flew across the city.

A putsch had been expected for days, yet when it came, it left Myanmar stunned — with roads to its main international airport blocked and communications cut — a country once more isolated from a world it only rejoined a decade ago.

“It’s extremely upsetting — I don’t want the coup,” a 64-year-old Burmese man in Hlaing township said, standing with a crowd outside a grocery stall.

The military declared, via its own television channel, a one-year state of emergency and announced that Myanmar Vice President Myint Swe, a former general, would be acting president for the next year.

It alleged “huge irregularities” in the November polls that the election commission had failed to address.

“As the situation must be resolved according to the law, a state of emergency is declared,” the announcement said.

The army later pledged to hold fresh elections after the year-long state of emergency.

Aung San Suu Kyi had issued a pre-emptive statement ahead of her detention, calling on people “not to accept a coup,” according to a post on the official Facebook page of the party’s chairperson.

The military moved quickly to stifle dissent, severely restricting the Internet and mobile phone communications across the country.

In Yangon, troops seized the city hall just ahead of the announcement, an Agence France-Presse journalist said. AFP saw several trucks in Yangon carrying army supporters, with Myanmar flags and blaring nationalist songs, and some NLD members reported that security forces had ordered them to stay at home.

People rushed to their neighborhood grocery stores to stock up on rice, oil and instant noodles as banks were temporarily closed by the communications freeze.

Washington was swift to react to the news.

“The United States opposes any attempt to alter the outcome of recent elections or impede Myanmar’s democratic transition, and will take action against those responsible if these steps are not reversed,” White House spokeswoman Jen Psaki said in a statement.

UN Secretary-General Antonio Guterres, the EU, the UK and Australia were among others to condemn the coup.

China declined to criticize anyone, instead calling for all sides to “resolve differences.”