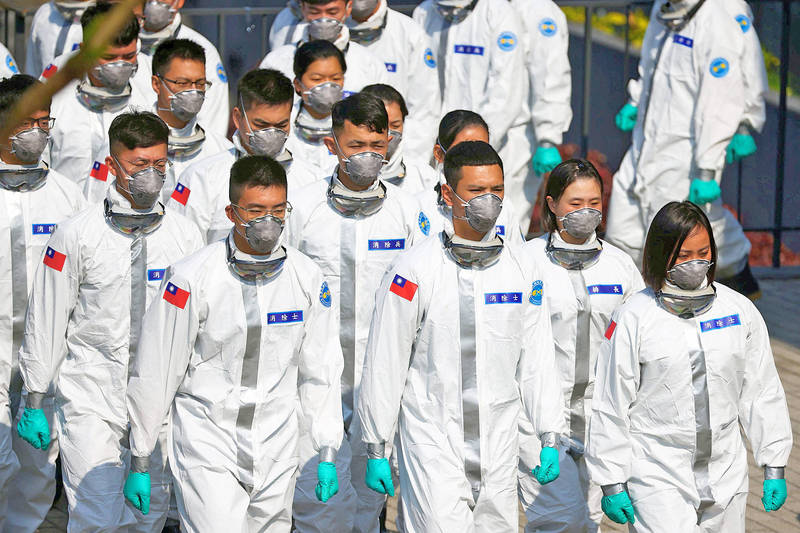 MYSTERY: The man had contracted the virus while working in Japan, then tested negative seven times before the latest test, which returned positive yesterday

The Central Epidemic Command Center （CECC） yesterday reported one imported case of COVID-19 — a Taiwanese man who had contracted the virus in Japan and tested negative several times before returning to Taiwan, before testing positive again.

Minister of Health and Welfare Chen Shih-chung （陳時中）, who heads the center, said the man, case No. 913, went to Japan for work in January last year.

The man, in his 30s, was exposed to a confirmed case of COVID-19 at his workplace, so he was tested on Dec. 25 last year and was isolated in hospital when the result returned positive, Chen said.

After he tested negative on Dec. 29, he was released from the hospital on Jan. 1, Chen said.

From Jan. 2 to Jan. 6, the man paid for five other tests, which all came back negative, Chen said.

The man, in his 30s, returned to Taiwan on Jan. 9 and reported to airport quarantine officers that he had tested positive in Japan, so he was tested at the airport and tested again at a centralized quarantine facility, and both results were negative.

The man moved to a quarantine hotel on Jan. 11 to complete his quarantine, and on Sunday last week moved to another hotel for self-health management, Chen said.

When he developed a cough, runny nose and diarrhea on Friday, the local health department arranged for him to see a doctor and his test result came back positive yesterday, Chen said.

Centers for Disease Control Deputy Director-General Chuang Jen-hsiang （莊人祥）, the CECC’s spokesman, said that the man’s cycle threshold （CT） value in the polymerase chain reaction （PCR） test was relatively high at 36, indicating a low viral load, so he likely contracted the disease a long time ago.

The man likely contracted the disease only once, in Japan, as his CT value was high, and he is to undergo more PCR and antibody tests at hospital to clarify the situation, Chang said, adding that the symptoms the man experienced might be due another infection, not necessarily a second COVID-19 infection.

Chen said that as of yesterday, 4,337 people associated with the cluster infection at Taoyuan General Hospital have been put under home isolation, and 396 people have been released from isolation.

The hospital has submitted its final clearance plan — including disinfection and widescale tests — to ensure the hospital’s employees and the environment are safe from COVID-19 to the CECC for review, Chen said, adding that the project is to be launched on Thursday.

The project is to include PCR tests for all hospital employees and contract workers, excluding those that have just been tested or are about to be tested upon ending quarantine.

They will also receive a serological antibody test to clarify whether they had been infected, but did not test positive in previous PCR tests.

Environment testing would also be conducted in high-risk areas first, he said.