《TAIPEI TIMES》 Reports of vaccines from US unfounded, CECC says 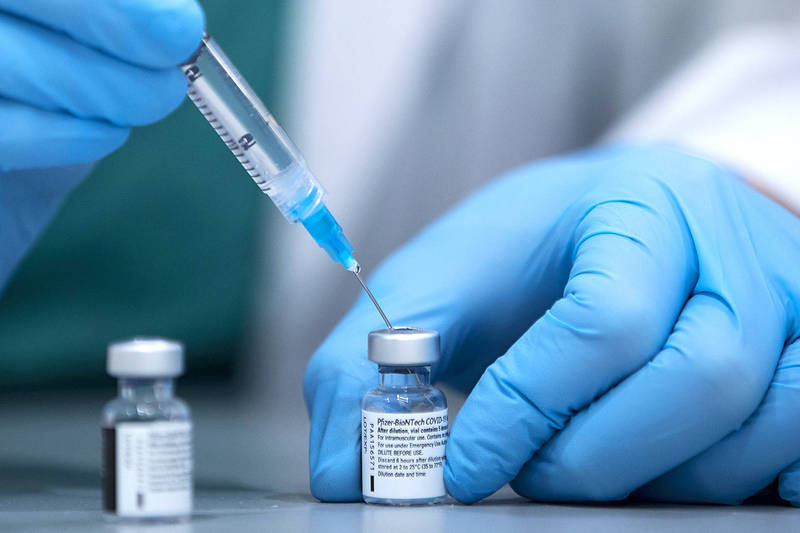 In this photo, a health care professional prepares a Pfizer-BioNTech COVID-19 vaccine at Sheba Tel Hashomer Hospital in Ramat Gan, Israel. Israel Defense Minister Benny Gantz’s office said Sundya, Jan. 31, 2021, that Israel has agreed to transfer 5,000 doses of the coronavirus vaccine to the Palestinians to immunize front-line medical workers. It is the first time that Israel has confirmed the transfer of vaccines to the Palestinians. Photo: AP

FIRST TO KNOW: If Taiwan was set to receive vaccines on Thursday, the center would already know and would have made a public announcement, the health minister said

The Central Epidemic Command Center （CECC） yesterday denied a report that Taiwan had obtained 100,000 doses of the Pfizer-BioNTech COVID-19 vaccine and that they were expected to arrive on Thursday.

The CECC would officially announce the latest progress on procuring vaccines as soon as it is confirmed, said Minister of Health and Welfare Chen Shih-chung （陳時中）, who heads the center.

The Chinese-language United Daily News yesterday published the report on its front page, saying that the CECC, “through diplomatic channels in the US,” obtained 100,000 doses of the vaccine, which were to be flown in on Thursday.

The newspaper on Sunday evening contacted the CECC to confirm the information, Chen said, adding that the center told the paper that it had not received notification that the vaccines would be sent to Taiwan on Thursday.

If the US offered vaccines, the center would accept them and make an announcement about it as soon as possible, he said.

“The incorrect information given in the report includes the phrase ‘shipped by air to Taiwan on Feb. 4,’ which is definitely not true, because if they were to be shipped on Thursday, we would know that we were receiving the vaccines by now,” he said. “But we are sure we have not obtained the 100,000 doses.”

The report mentioned the shipping would be handled by the airline Emirates, which is also not true, Chen said.

“If we are sure that COVID-19 vaccines would be imported, we would announce it, so people should avoid speculation,” he said, adding that the center would continue to make every effort to secure vaccines through various channels.

The report said that healthcare professionals in Taoyuan, where a cluster infection at a hospital occurred last month, would have priority in receiving the jab.

Chen said that healthcare professionals would certainly have priority in being vaccinated, as well as frontline disease prevention personnel.