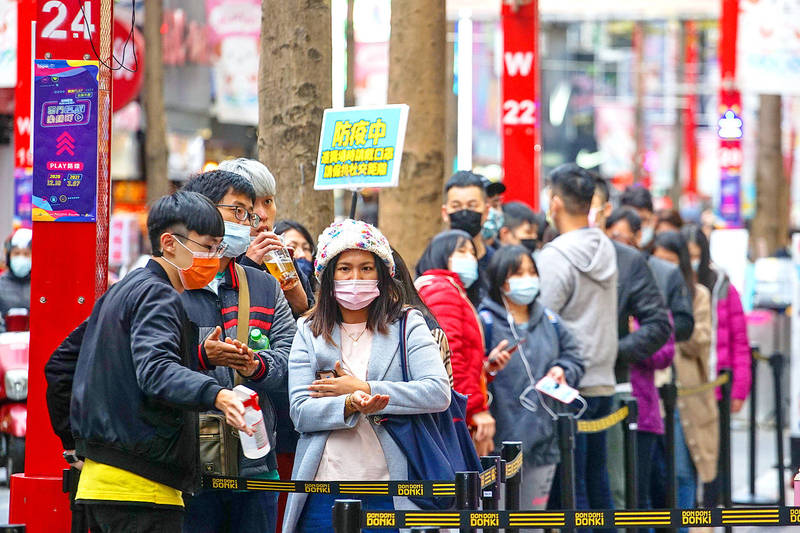 RULES TIGHTENED: There are three exceptions to the ban on visiting patients, including a waiver on the relatives of people who are to undergo surgery or invasive treatment

People are banned from visiting patients in hospitals in Taipei, New Taipei City and Taoyuan until Feb. 9, the Central Epidemic Command Center （CECC） announced yesterday, as it reported three imported cases of COVID-19.

Minister of Health and Welfare Chen Shih-chung （陳時中）, who heads the center, said that in response to a COVID-19 cluster infection at Taoyuan General Hospital, the center was tightening access and personnel controls at hospitals in the three cities, effective immediately.

The hospitals would not accept visitors for hospitalized patients and each patient can have only one companion, he said.

There are three exceptions to the ban, Chen said.

The first is if a patient is undergoing surgery or an invasive treatment, and needs to be accompanied by a family member, or if the law requires a consent form or document to be signed by a patient’s relative, he said.

The second is if the condition of a patient in an emergency room, intensive care unit or palliative care unit needs to be explained to family members, he said.

The third exception is when a patient’s health condition worsens or they need medical treatment, or when a patient has been hospitalized for a long period and the hospital has approved a need for having visitors, Chen said.

The CECC urged people to wear a mask at all times when visiting hospitals, practice good respiratory hygiene and cough etiquette, wash their hands thoroughly and frequently, and cover their nose and mouth with a tissue if they cannot wear a mask due to special conditions.

Chen said that 3,482 people associated with the hospital cluster have been placed under mandatory isolation, including 399 hospital employees, adding that 143 healthcare professionals completed 14 days of isolation yesterday, but they would need to test negative before they are released from the isolation order.

The healthcare professionals would be asked to stay at home after being released, and the hospital would arrange them into two groups to work in rotation to prevent infection, he said.

All hospital employees would be tested and the premises would be disinfected on Thursday next week, Chen said.

As many people have been put under isolation due to the cluster, and they are required to undergo testing upon ending isolation, several temporary testing stations have been set up outside designated hospitals, Chen said.

Asked about an 18-year-old woman in Taoyuan who had been placed under home isolation, but was found dead in her room yesterday morning, Centers for Disease Control Deputy Director-General Chuang Jen-hsiang （莊人祥）, who is the CECC’s spokesman, said that she had a chronic disease, but added that samples would be taken for COVID-19 testing.

He said that the woman was hospitalized twice from Jan. 5 to Tuesday last week and from Thursday last week to Saturday, and a patient who stayed in the same hospital room as her was also a patient at Taoyuan General Hospital, so she was placed in isolation.

Chen said that three imported cases of COVID-19 were confirmed yesterday, including a Philippine migrant worker and a Burmese man, both in their 30s, who both tested positive in a paid test after completing 14 days of home quarantine.

The third case is a Taiwanese in her 40s who returned from the US on Sunday last week and developed a fever and diarrhea on Monday, he said.