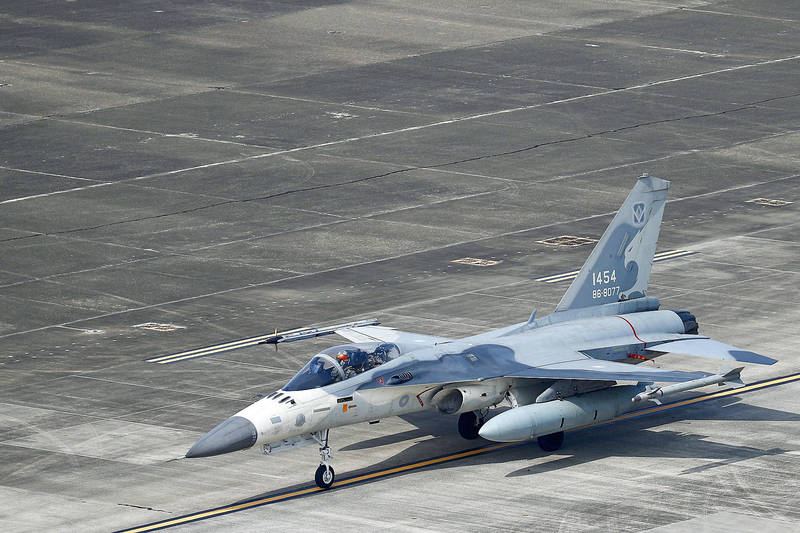 An Indigenous Defense Fighter jet prepares for takeoff during a drill at Tainan Air Base yesterday. Photo: Ritchie B. Tongo, EPA-EFE

The air force yesterday conducted a rare public drill, loading locally made cruise missiles that reportedly can reach coastal Chinese provinces, amid an increase in military threats from Beijing.

The missile, developed by the military’s top research unit, the Chungshan Institute of Science and Technology, is said to be able to hit Chinese airports and military units in China’s Fujian and Guangdong provinces if fired from Taiwanese fighter jets from near the median line of the Taiwan Strait.

However, Colonel Lee Ching-shi （李慶熙）, head of political warfare for the First Tactical Fighter Wing, declined to comment on the missiles’ range or whether air force fighters have already been armed with them on routine patrols.

The drill, which was open to the press, was part of the pre-Lunar New Year holiday drill that the military holds annually to show the public that the armed forces are combat-ready at all times.

An emergency takeoff drill was also held at the base to simulate a Chinese air invasion. It took only about five minutes for an IDF to take off after its pilot heard the scramble alarm.

That marks the 22nd day this month that China has sent aircraft into the nation’s ADIZ.

Asked to comment on the high frequency of Chinese intrusions, Lee said that the air force is under tremendous pressure, but would always be ready for combat to safeguard the nation’s airspace.

Lee said that the Taichung-based Third Tactical Fighter Wing has deployed another squadron of IDF jets at Magong Airport in outlying Penghu County, so that it would be able to respond immediately to any Chinese activity.