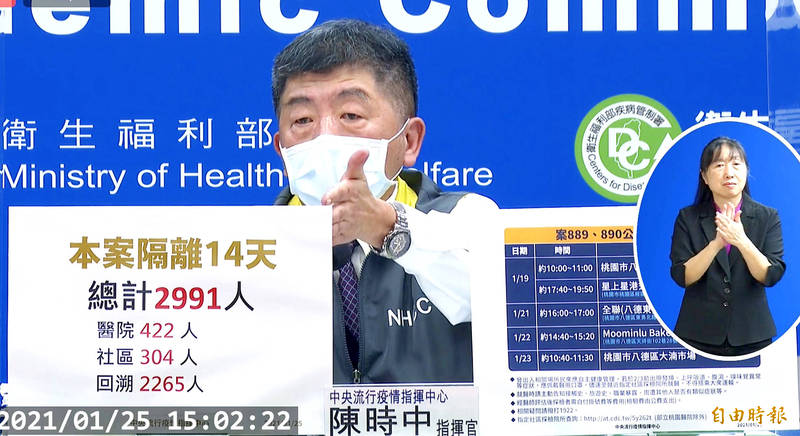 Minister of Health and Welfare Chen Shih-chung yesterday holds up a sign at a news conference in Taipei showing the number of people under home isolation as a result of a COVID-19 cluster infection at Taoyuan General Hospital. Photo: Lin Kuo-hsien, Taipei Times

‘INCREASED VIGILANCE’: A source of infection has not yet been found for the latest two cases in a hospital cluster, which should serve as a warning, Chen Shih-chung said

A total of 2,991 people associated with a COVID-19 cluster infection at Taoyuan General Hospital have been put under home isolation, after an emergency expanded isolation order was issued on Sunday evening, the Central Epidemic Command Center （CECC） said yesterday.

Fifteen people have so far tested positive in the cluster infection. The first case in the cluster （case No. 838） was reported on Jan. 12 — a doctor who treated an infected patient who had returned from the US.

Contact tracing for the first 13 cases found connections to case No. 838, said Minister of Health and Welfare Chen Shih-chung （陳時中）, who heads the center.

However, the two latest cases reported on Sunday — a man who had been hospitalized and his wife （case Nos. 889 and 890） — are a “warning” that calls for “increased vigilance,” because their infection source have not been identified yet, Chen said.

With the expanded isolation order, three categories of people who were at the hospital from Jan. 6 to Tuesday last week were immediately put under home isolation starting from 6:30pm on Sunday.

Chen on Sunday evening said that more than 5,000 people linked to the hospital cluster are expected to be put in isolation.

As of noon yesterday, 2,991 people had already been put under home isolation, he said.

They comprise 422 hospital employees, 304 people in local communities who had close contact with confirmed cases and 2,265 people recalled for emergency expanded isolation on Sunday, he said.

Of the people recalled, 1,048 are patients who were discharged from the hospital and 1,217 are caregivers of hospitalized patients or family members of patients who live with them, CECC data showed.

Chen said the number of people placed under home isolation is expected to increase, as contact tracing is still being conducted.

The number of personnel at the CECC’s 1922 hotline were increased from 36 to 98 on Sunday, but response speed was still relatively slow, as the hotline received nearly 10,000 calls, he said, adding that a total of 213 hotline personnel were deployed yesterday to help answer the calls.

Asked by reporters about the emergency expanded isolation order, Chen said people who fall in the categories, but who have not received an official isolation notice should “stay at home and wait to be informed by their local health department.”

After receiving a notice, they should practice home isolation for 14 days starting from the day after they left the hospital, undergo a mandatory polymerase chain reaction test upon ending isolation and continue with an additional seven days of self-health management, he said.

People who sought treatment at the hospital’s outpatient or emergency departments after Jan. 6 are required to practice 14 days of self-health management starting from the day after they sought treatment, Chen said.

The National Health Insurance cards of those people have been temporarily flagged so that doctors at other healthcare facilities would know about their exposure to the Taoyuan hospital if they seek medical attention elsewhere, he added.

Chen said people under self-health management should take their temperature daily in the morning and evening, frequently wash their hands, wear a mask at all times when going outdoors, and refrain from taking public transportation or going to public places where they cannot practice social distancing.

People under isolation, quarantine or self-health management linked to the hospital cluster are encouraged to consult with emergency doctors through the CECC’s mobile app launched on Sunday if they feel discomfort, he said.

The center plans to discuss with the Ministry of Transportation and Communications whether to tighten regulations on high-speed rail trains during the Lunar New Year holiday, he said.