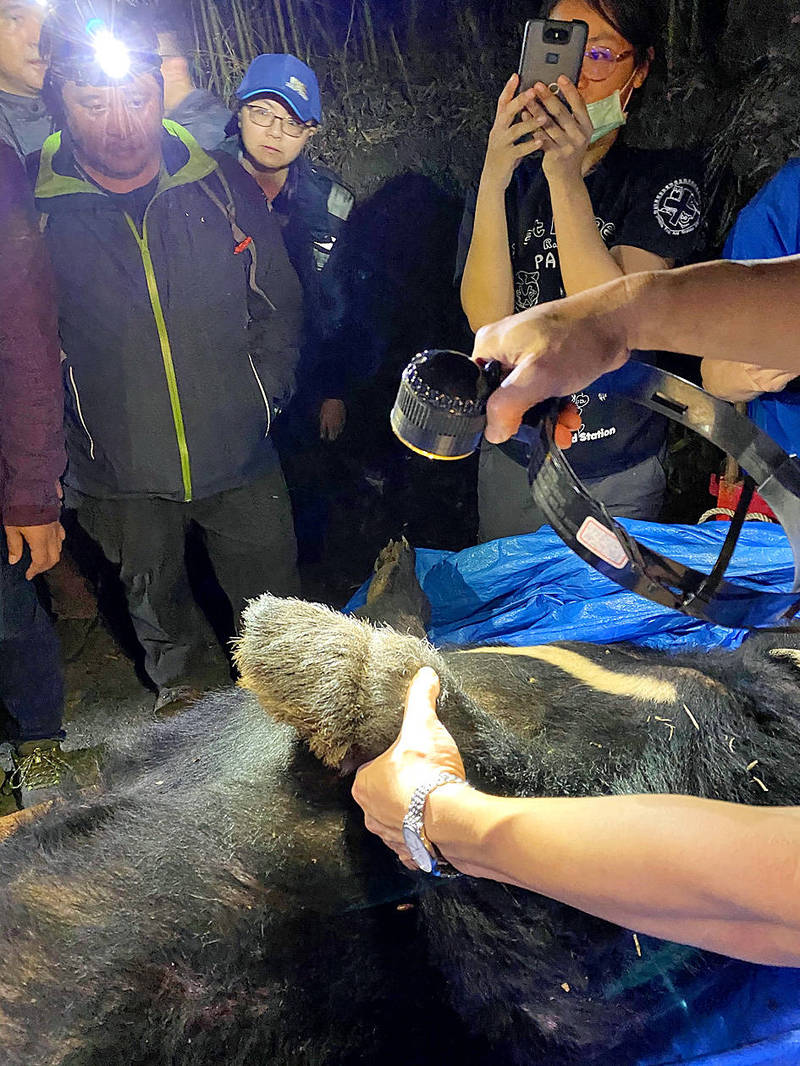 OPPORTUNISTS: The best way to prevent Formosan black bears from encroaching on residential areas is to stop providing them with food, bear expert Hwang Mei-hsiu said

The government should help people manage risks posed by wild animals, bear expert Hwang Mei-hsiu （黃美秀） said yesterday, after a Formosan black bear was caught in a trap twice in less than two months, possibly the fourth time it has been trapped.

In October last year, the bear, later codenamed No. 711, was rescued from a trap by the Dongshih Forest District Office. It was treated, fitted with a tracker and released to the wild on Taichung’s Dongmao Mountain （東卯山） on Dec. 3.

However, the office on Saturday found via the tracker that the bear had not moved since the night before and sent a team to investigate.

The team found the bear caught in a trap in a bamboo grove and sent it back to the Endemic Species Research Institute Low Altitude Experimental Station in Taichung for treatment and relocation.

Based on the animal’s scars, it was likely the fourth time it has been caught in a trap meant to ensnare macaques or wild boars, Hwang said on Facebook.

Some people believe that bears should not enter the low-elevation mountains in Taichung, as it is densely populated, but it is actually farmland interspersed with forest that is 1km above sea level, she said, adding that based on No. 711’s activity, the bear spends most of its time in uninhabited areas.

Formosan black bears require a broad territory without much human interference, she said.

Since bears are highly intelligent opportunists, the best way to prevent them from becoming a nuisance is to stop giving them positive reinforcement in the form of food, she said.

Hwang recommended that the office “use satellite positioning during the day to devise a strategy and deploy a team, clear human food from the area, and after nightfall hold the line and step up intermittent harassment.”

Authorities must look out for potential hazards to wildlife, as well as assist the public in dealing with potential damage wrought by wild animals to make sure that traps targeting other animals, such as macaques or wild boars, do not accidentally ensnare black bears, she added.

Based on her correspondence with older residents of Taoyuan’s Taoshan Village （桃山）, where bear No. 711 had been stealing food, Hwang said that people are relatively tolerant of black bears.

However, some people are afraid of them and lack sufficient knowledge, so without education about how to manage the threat, residents have failed to notify authorities or take appropriate measures, such as clearing food or pruning vegetation around farmland, to prevent black bear encroachment, she said.

“This is likely the first case of human-bear conflict that has gained considerable attention from people, conservation groups and the media,” Hwang said. “I hope the authorities will communicate with the public in a professional, wise and patient manner to create a beneficial balance between humans and bears, and establish a model for Formosan black bear conservation.”

“This place is our traditional land, but it is also the black bears’ traditional land,’” Hwang quoted a resident as saying. “This understanding is the precondition for living and thriving together.”