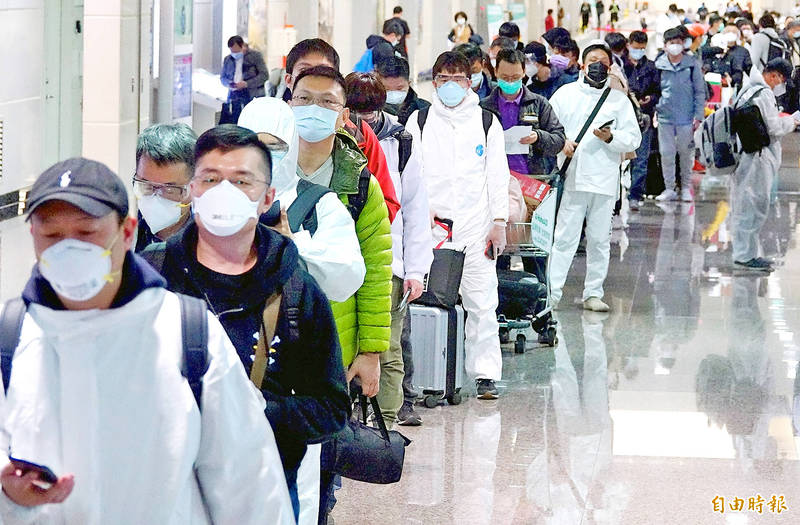 DUBIOUS HONOR? A man in his 90s, who tested positive yesterday and is part of the Taoyuan hospital cluster, is the oldest person in Taiwan to have contracted COVID-19

One of the domestic cases is a man in his 90s, who was treated earlier this month at Taoyuan General Hospital and tested negative for COVID-19 on Monday last week, four days before he was discharged, the center said in a statement.

After one of the nurses on the ward was confirmed on Saturday last week to have contracted COVID-19, the man was instructed to quarantine at home, but he developed a severe toothache and was allowed to visit a dentist on Thursday, the center said.

During that visit to a branch of Chang Gung Memorial Hospital, he was found to have a fever, and subsequent diagnostic tests found that he had a lung condition associated with pneumonia, it added.

The man was then tested again for COVID-19, and the results returned positive yesterday, it said, adding that he is the oldest person in Taiwan to have contracted the virus.

A member of his family, a woman in her 60s who lives in the same home, was also confirmed yesterday to have contracted the virus, the center said.

Two other relatives in the home, who usually take care of the elderly man, tested negative on Sunday, but are now in home quarantine, it said.

At a news conference in Taipei, Minister of Health and Welfare Chen Shih-chung （陳時中）, who heads the center, declined to say whether it was the Linkou （林口） or Taoyuan branch of Chang Gung Memorial Hospital that the man had visited.

Since Tuesday last week, when the first case at Taoyuan General Hospital was reported, 12 infections have been confirmed in the cluster, including two doctors, four nurses, a migrant caregiver and three relatives of the nurses.

The six new imported cases of COVID-19 were arrivals from Cameroon, Indonesia and the Philippines.

Of the nation’s 881 cases of COVID-19, 774 are imported. Seven of those infected have died, while 777 have recovered and 97 are being treated in hospitals.

Separately yesterday, the Taiwan Railways Administration announced that it would stop leasing public space inside train stations to event organizers.

Eating and drinking are banned in the main hall of the Taipei Railway Station, and people should not congregate there, it added.

Disease prevention measures, such as social distancing and setting up plastic shields on tabletops, have been implemented in the food court of the station, the agency said, adding that it plans to install 16 more infrared thermometers before the Lunar New Year holiday.