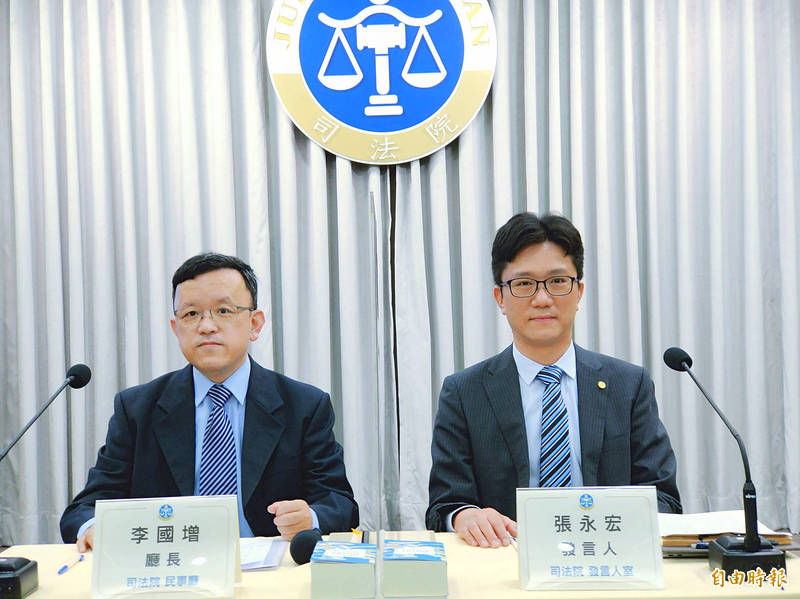 The Judicial Yuan yesterday approved draft revisions to a law that would grant recognition to all international same-sex marriages, except for those involving a partner from China, and said it would send them to the Legislative Yuan for review.

The changes would apply to Article 46 of the Act Governing the Choice of Law in Civil Matters Involving Foreign Elements （涉外民事法律適用法）, which states that “the formation of a marriage is governed by the national law of each party.”

In practice, this has meant that same-sex couples involving a partner from a country in which same-sex marriage is not recognized are not allowed to marry in Taiwan, or have a marriage conducted in a third country legally recognized.

The Judicial Yuan said in a news release that it had recommended changing the law to allow and recognize such marriages as long as one of the partners is Taiwanese.

It explained the decision by noting that same-sex marriage is legal in only 29 countries around the world.

Despite its recommendation, the Judicial Yuan said the changes would not apply to couples involving a partner from China, which is subject to separate laws governing Taiwan-China relations.

However, the new rules would apply to couples involving a partner from Hong Kong or Macau, which fall under another jurisdiction, the Judicial Yuan said.

The draft revisions are to be sent to the Executive Yuan before they are jointly submitted by the two government branches to the Legislative Yuan for its review.

The Council of Grand Justices on May 24, 2017, ruled that the nation’s Civil Code provisions that did not allow same-sex marriage were unconstitutional, giving the government two years to amend them.

In May 2019, the Legislative Yuan passed a marriage equality law extending to same-sex couples almost all the marriage rights available to heterosexual couples under the Civil Code.

The law took effect on May 24, 2019, making Taiwan the first country in Asia to legalize same-sex marriage.