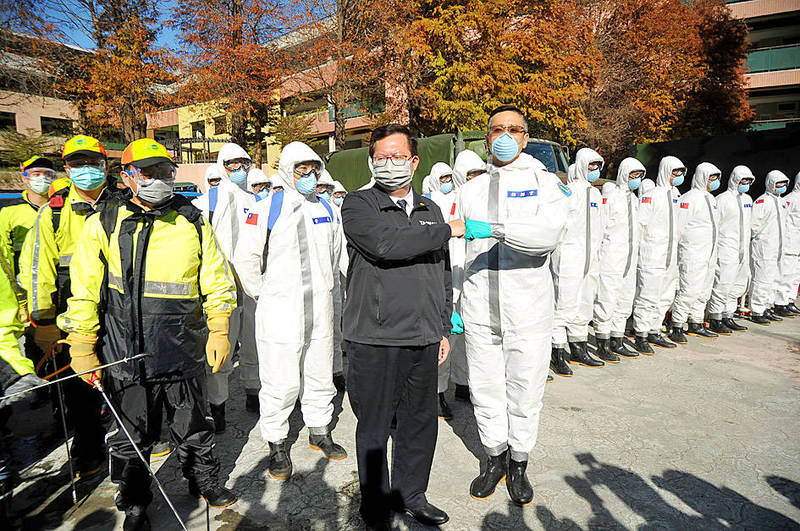 Three local governments separately issued advisories or bans on travel to Taoyuan for their employees, with the Central Epidemic Command Center （CECC） as of Wednesday confirming 10 cases in an outbreak at the Ministry of Health and Welfare’s Taoyuan General Hospital.

Penghu, Yunlin and Miaoli counties issued the advisories and bans on their own initiative.

“Starting today, employees of the county government and its subordinate agencies are to avoid work-related trips to or official meetings in Taoyuan that are nonessential,” the Miaoli County Government said in a notice.

Miaoli County Commissioner Hsu Yao-chang （徐耀昌） confirmed that he authorized the document and that county employees are encouraged to use e-mail or telephone calls to replace in-person meetings.

On the sidelines of an official inspection at the hospital, Taoyuan Mayor Cheng Wen-tsan （鄭文燦） of the Democratic Progressive Party （DPP） called for unity, saying: “There is only one Taiwan.”

“Cooperation between central and local governments, the public and private sectors, and counties and cities is needed to manage this pandemic,” Cheng said. “Taoyuan is now on the pandemic front line and carries an especially heavy responsibility.”

Taoyuan “will not change its spirit of collaboration and solidarity will not be changed by the Penghu County Government’s announcement,” he said.

Taoyuan’s quarantine hotels have served Taiwan’s outlying islands, including Penghu, he said, adding that the hotels this month have provided quarantine accommodation for nine residents of that county, with six still in residence.

In related news, the Keelung City Government called on restaurants and businesses to offer discounts and other benefits to medical personnel.

Amid reports of the hospital cluster infection in Taoyuan, some restaurants have reportedly been mistreating healthcare workers, Keelung Mayor Lin Yu-chang （林右昌） of the DPP said on Tuesday.

The city started the initiative to provide a practical expression of its support, Lin said.

Twenty-seven businesses had already joined, offering 10 to 20 percent discounts, coupons or other benefits, he said.

To receive the discounts, medical staff only need to show their identification at participating stores, he said.

Hopefully, businesses across the nation would join Keelung in lending support to the nation’s pandemic heroes, Lin said.

Information about participating businesses can be found on the Keelung City Government Web site, while shops interested in participating should call （02） 2422-5800.

The Kinmen County Government, also governed by the KMT, late yesterday said that it does not forbid county employees from traveling to any part of Taiwan, but has urged them to keep nonessential work-related travel to a minimum.

Staff at a restaurant in Taoyuan load boxed lunches into a vehicle to be delivered to the the Ministry of Health and Welfare Taoyuan General Hospital to support medical staff. Photo: Lee Jung-ping, Taipei Times