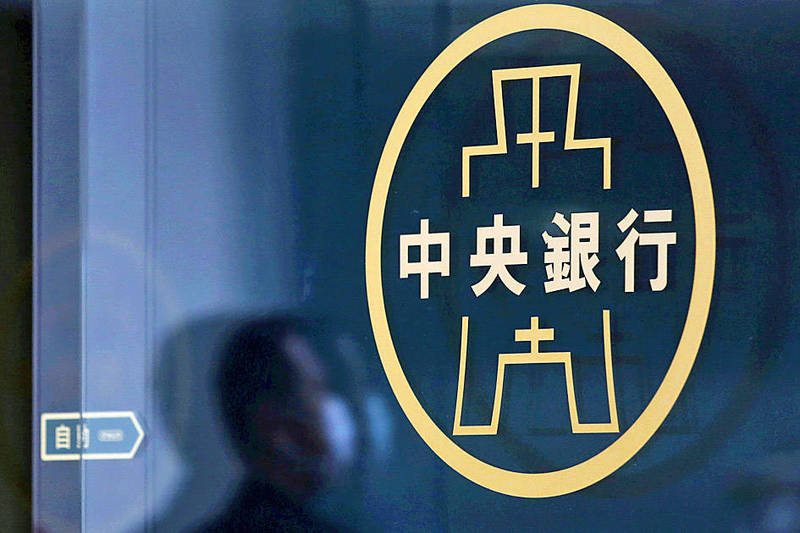 A passerby is reflected next to the central bank’s logo in Taipei on March 16, 2016. Photo: Tyrone Siu, Reuters

AWARENESS NEEDED: The central bank urged lenders to know their customers before undertaking business for them and to seek funding in conventional ways

The central bank yesterday said that it would take action against four foreign lenders for their involvement in helping companies trade in the deliverable forward market in contravention of foreign-exchange regulations.

Some grain merchants newly based in Taiwan have since July 2019 been practicing questionable currency-trading activity, with the help of branches and subsidiaries of six foreign banks, the monetary policymaker told an unscheduled news conference.

Affiliated firms as of July last year completed currency-related deals they referred to as trading that totaled US$11 billion, which was not in sync with their real business needs, the central bank said after wrapping up a probe.

The central bank said that it is weighing disciplinary measures against four of the lenders because the grain merchants fall outside of its purview and two of the lenders quit the questionable practices in November last year.

The central bank declined to name the firms, but indicated that penalties could mean the suspension of currency-related operations.

The New Taiwan dollar’s appreciation against the US dollar is a big headache for the central bank, which has allegedly intervened in the final 15 minutes of local trading sessions to slow the pace.

A strong NT dollar is unfavorable for corporate profits and pricing competitiveness.

The central bank urged lenders to know their customers better before undertaking business for them.

It also called on local companies to stop borrowing cheaper US dollars abroad so that they can sell them at higher rates on the local market.

The central bank has an annual cap of US$50 million to meet exporters’ settlement needs and most firms never approach that threshold, except for recently when some sought to circumvent the cap by creating front companies.

The bank reiterated that it needs to take the steps necessary to maintain an orderly and stable foreign-exchange market.