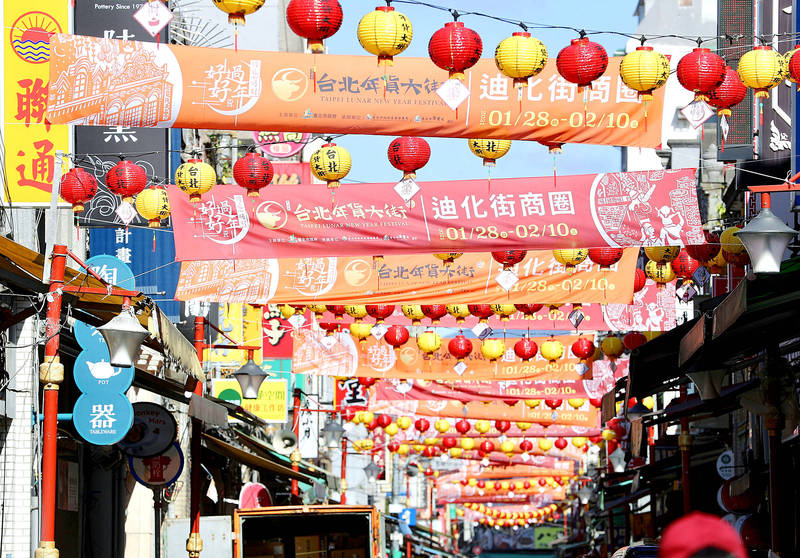 Banners and lanterns on Dihua Street in Taipei’s Datong District yesterday announce the dates of the annual Lunar New Year market, which has been canceled. Photo: CNA

The market was to open on Thursday next week and run through Feb. 10, while the lantern festival was to run from Feb. 26 to March 7.

Taipei Mayor Ko Wen-je （柯文哲） said that the decisions were made after considering the COVID-19 situation reported by the Central Epidemic Command Center and discussions with city departments.

“We think it is inappropriate to hold a large public event at this time, so the Lunar New Year market’s brick-and-mortar activities have been canceled, and the Taipei Lantern Festival postponed,” Ko said.

A cluster of infections linked to a Taoyuan hospital over the past week has spread to family members of healthcare professionals, and the next few days are critical to observe whether local transmission

has occurred, he said.

The lantern festival would be held later in the year, when the virus situation improves, he said.

Asked whether the hospital should conduct mass testing, Ko said that testing does not detect the virus in people who are in the early stage of the incubation period.

The purpose of mass testing is to detect asymptomatic carriers, whose number is relatively small, Ko said, adding that disease prevention should be implemented in a cost effective way.

The city government has set up standard operating procedures in case the COVID-19 situation worsens and community spread is confirmed, including temporarily halting meal sharing services for elderly people and limiting the number of people at gatherings, he said.

However, details on the tightened measures do not need to be announced at this time, as they would only frighten people, he said.

Separately, the Ministry of the Interior issued notices to religious groups, asking them to consider suspending large events.

Jenn Lann Temple （鎮瀾宮） in Taichung’s Dajia District （大甲） said that it would not hold an event at which people race to place the first incense in a burner.

The New Taipei City-based Dharma Drum Mountain organization said that it would livestream its annual event on Lunar New Year’s Eve on Feb. 11.

Yunglian Temple （湧蓮寺） in New Taipei City’s Luzhou District （蘆洲） said that it was still discussing whether it would hold its annual events, adding that it would decide by Wednesday next week.

Nanyao Temple （南瑤宮） in Changhua County said that it is suspending its midnight incense run on Feb. 11.

Fusing Temple （福興宮） in Yunlin County’s Xiluo Township （西螺） said it has canceled its run and would instead have a representative place the first incense.

However, it would continue with its hongbao （紅包, “red envelope”） distribution event, although it would mandate that everyone wear a mask on temple grounds.

Fo Guang Shan Temple （佛光山） in Kaohsiung said it has canceled all of its Lunar New Year events.

Tzunan Temple （紫南宮） in Nantou County announced that it is canceling events, while the Yanshui Beehive Fireworks Festival （鹽水蜂炮） in Tainan has also been canceled.

However, Pingtung City, as well as Chaozhou （潮州） and Neipu （內埔） townships in Pingtung County, are going ahead with market events, citing financial losses of more than NT$10 million （US$351,927） if they are canceled.

The Chaozhou Township Office and Pingtung Mayor Lin Hsieh-sung （林協松） said that they would cancel the events if the center orders them to do so.