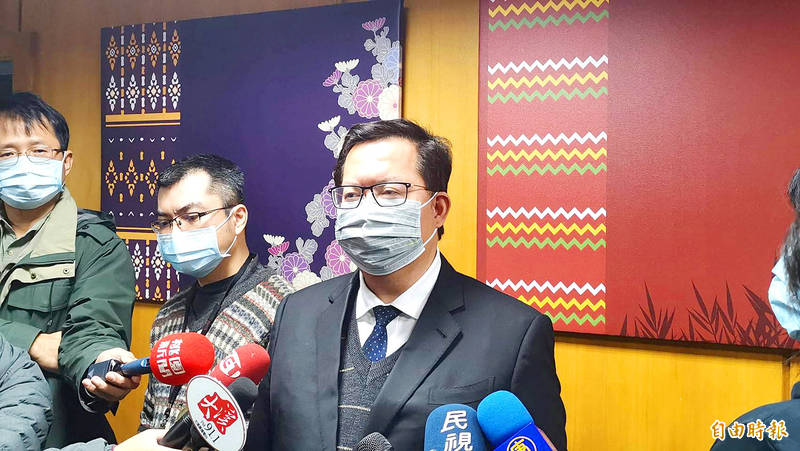 Taoyuan Mayor Cheng Wen-tsan, right, answers questions from reporters in the city yesterday about a telephone discussion he had with Minister of Health and Welfare Chen Shih-chung. Photo: Hsieh Wu-hsiung, Taipei Times

ALLEVIATING FEARS: The CECC would only announce public places where it is difficult to identify everyone there at the same time as the couple, minister Chen said

The Central Epidemic Command Center （CECC） yesterday announced six places where two locally infected COVID-19 cases had visited between Thursday last week and Sunday, urging people who had been at the places at the same time to monitor their health.

The couple, cases 838, a doctor, and 839, his nurse girlfriend, were reported by the center on Tuesday.

They work in the same hospital in northern Taiwan, but the nurse had not worked with COVID-19 patients, so she was likely to have been infected by her boyfriend, the center said on Tuesday.

Minister of Health and Welfare Chen Shih-chung （陳時中）, who heads the center, yesterday listed six places that one or both had visited, following up on places in Taoyuan that the doctor remembered visiting between Wednesday and Saturday, including a Starbucks outlet and a hardware store.

On Saturday, the nurse went to Pxmart’s Lujhu Dajhu Branch （蘆竹大竹店） between 9:30am and 10am, cosmetics chain Poya’s Dajhu Dasin （大竹大新店） outlet between 10am and 10:30am, and MetroWalk Shopping Center between 6:45pm and 8pm, the center said.

People who were also at those places during those time periods should practice self-health management, it said.

However, they should seek medical attention at hospitals designated for COVID-19 testing if they develop related symptoms before Sunday next week, such as a fever, respiratory symptoms, or loss of smell or taste, it added.

There had been some confusion about where the couple had been last week, as it is understandable for people to forget some things, but the newly announced locations had been confirmed through police technologies, Chen said.

The center would not announce all locations that confirmed cases had visited, just public places where it is difficult to identify everyone who were there at the same time, Chen reiterated.

The public should not be overly concerned as a short exposure time and proper protective measures, such as wearing a mask, can greatly reduce the risk of infection, he added.

Of the 55 close contacts of the couple within local communities — not including people at the hospital where they work — who have been tested, 47 had tested negative as of yesterday afternoon and seven were awaiting results, the minister said.

About 2,200 employees of the hospital would also be tested, and the hospital is to submit its testing plan, including testing priority, to the center for review, which was expected to take place tomorrow at the earliest, he said.