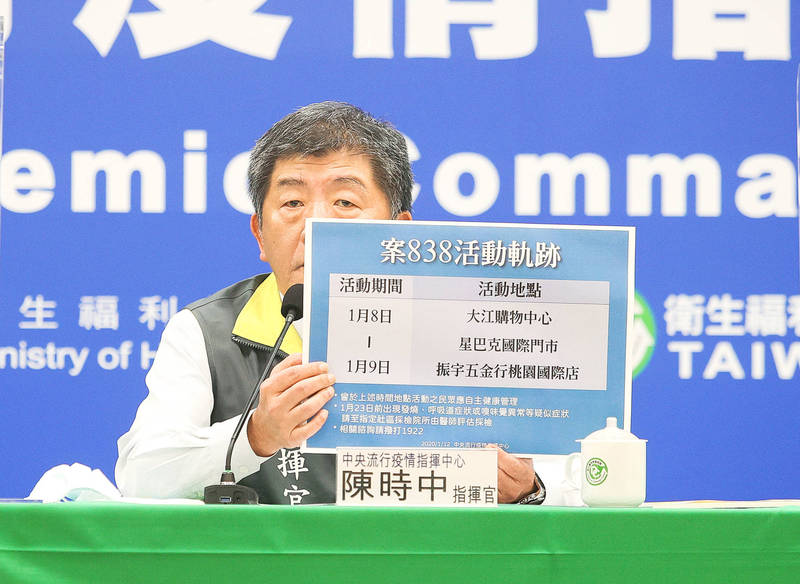 Minister of Health and Welfare Chen Shih-chung presents the details of a confirmed COVID-19 case during a news conference at the Central Epidemic Command Center in Taipei on Saturday. Photo: CNA

Starting today, travelers who have been to South Africa or Eswatini within 14 days before entering Taiwan would be subject to centralized quarantine upon arrival, the Central Epidemic Command Center （CECC） said yesterday, as it confirmed Taiwan’s first person infected with a new variant of COVID-19 circulating in South Africa.

Minister of Health and Welfare Chen Shih-chung （陳時中）, who heads the center, said that travelers arriving in Taiwan after midnight today and who have been to South Africa or Eswatini, including transit passengers, would be required to stay at a centralized quarantine facility.

They would be required to undergo two polymerase chain reaction （PCR） tests at the quarantine facility — when they arrive and upon completing the 14 days of quarantine — he said, adding that those who test negative would be allowed to return home for another seven days of self-health management.

Chen said that the special program adopts the same quarantine measures as the policy on travelers who have been to the UK within 14 days of entering Taiwan.

Travelers would not be charged for the tests or their stay at a centralized quarantine facility, he said, urging them to honestly report their health conditions to quarantine officers upon arrival.

He said that 38 specimens have since October last year been collected from COVID-19 patients with higher viral loads — those with PCR cycle threshold values of 27 or under — for genome sequence analysis.

Among them, five were confirmed to have been infected with a new variant first reported in the UK and one was infected with the variant circulating in South Africa, he added.

The South African variant has been reported in 12 other countries and is believed to spread faster than other strains of COVID-19, he said.

One of the cases is an Indian man in his 30s who arrived in Taiwan on Dec. 18 last year and stayed in a quarantine hotel until Jan. 2, Chen said.

He practiced self-health management until Friday last week, without showing symptoms, he said.

He underwent a paid test at a hospital on Monday and the result returned positive yesterday, he added.

Chen said the three other cases are Indonesian fishermen in their 20s and 30s who arrived in Taiwan between Dec. 27 and Dec. 30, and all stayed in quarantine hotels or centralized quarantine facilities, as they did not show symptoms.

They were tested on Monday and Tuesday, and the results returned positive yesterday, he said.