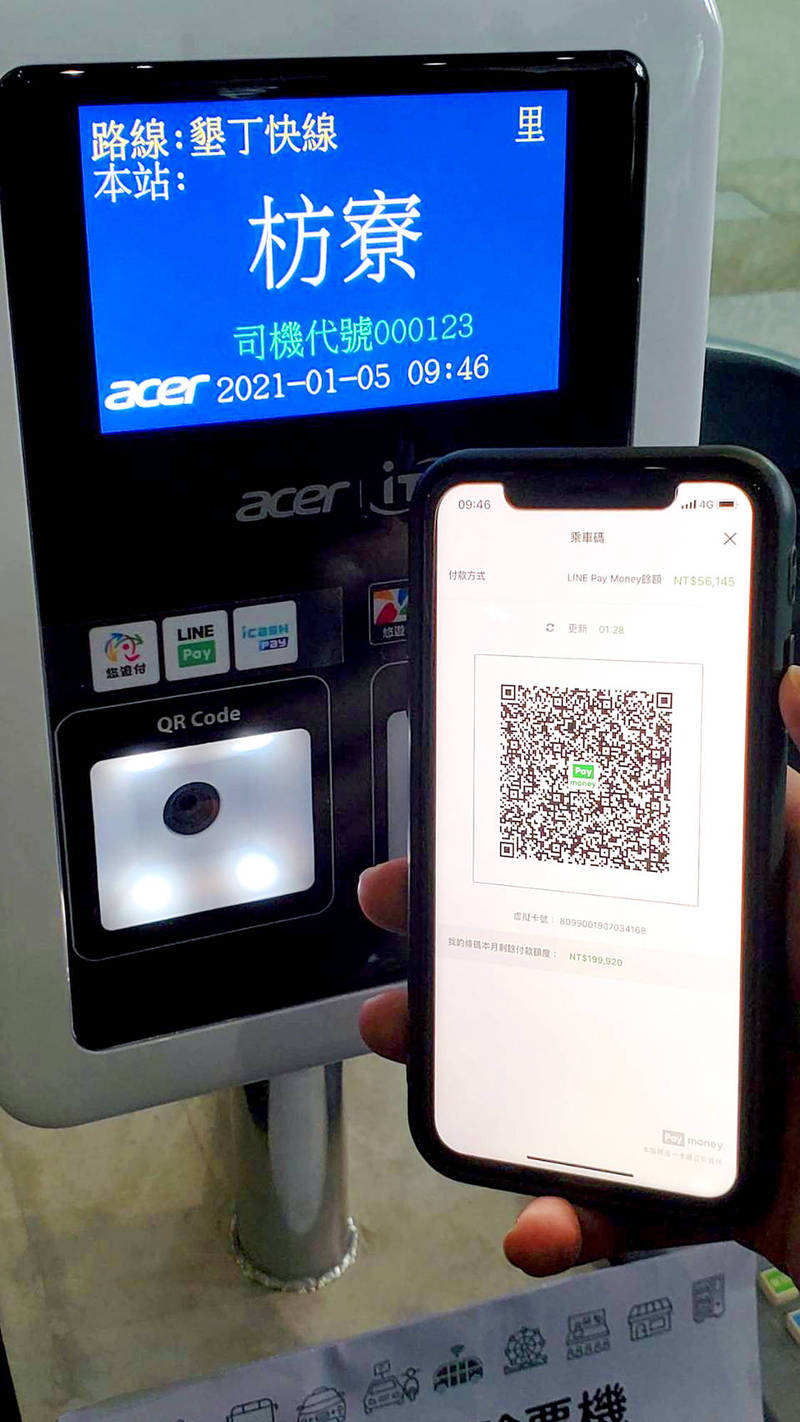 A QR code for Line Pay is pictured in an undated photograph. Photo courtesy of the iPass Card

To pay via mobile payment, the passenger opens a QR code in their electronic wallet and places it close to the sensor on the bus’ card reader. A beep signals that the transaction is complete.

Public bus services across the nation are accessed about 12 billion times per year and generate more than NT$33 billion （US$1.16 billion） annually, Minister of Transportation and Communications Lin Chia-lung （林佳龍） told a launch ceremony.

“What is most valuable is the amount of big data collected through the bus service,” Lin said. “Analyzing data allows the bus operators to identify patterns in rider behavior, which allows them to improve their services and accurately market their services to target users.”

“The operators could develop value-added services by working with other service operators. It could potentially turn into a huge industry,” he added.

The incorporation of mobile payments into public transport is key for the nation’s development of a smart transportation system, which needs to know the flow of passengers, traffic, cash and data, he said.

Lin voiced his confidence in the trial’s success, saying that the test run would allow passengers, bus operators and manufacturers of card readers to help improve the service.

Card readers on the more than 15,000 buses across the nation are to be upgraded or replaced by 2025, Lin said.

If the trial proves successful, the number of bus routes accepting mobile payments would be expanded, DGH Director-General Hsu Cheng-chang （許鉦漳） said, adding that other mobile payment companies would be encouraged to participate.

To encourage people to switch to mobile payments, the bus operators and mobile payment companies participating in the trial are offering promotions, from a 50 percent discount on fares to points that accumulate to pay for up to 20 percent of a fare.

In other news, visitors to the Wuling Farm’s Cherry Blossom Season, which is open from Feb. 12 to March 1, are encouraged to take a public bus for a discount on admission, the highway authority said.

Starting today, independent travelers departing from Taipei or Yilan for a one-day tour at the farm can buy their bus tickets at the bus stations of Kuo-Kuang Motor Transportation, or at 7-Eleven, FamilyMart and Hi-Life convenience stores, it added.

Cherry blossoms are pictured in an undated photograph taken at the Wuling Farm in Taichung. The cherry blossom season starts on Feb. 12. Photo courtesy of Wuling Farm