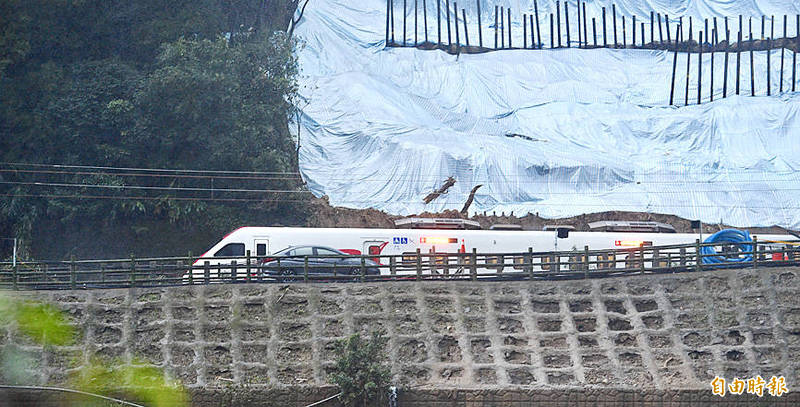 The agency managed to clear the debris on the east mainline of the track by 9pm on Sunday.

The first train to travel through the section since the landslide arrived at Houtong Railway Station at 5:17am and was greeted by Minister of Transportation and Communications Lin Chia-lung （林佳龍）, who was waiting on the platform.

He distributed some money to the construction crew as a reward for their hard work.

“Our construction crew managed to achieve the goal despite inclement weather conditions over the past 10 days, removing more than 10,000m3 of debris,” he said.

Lin said it would take more than one-and-a-half months to fix the west mainline, but the Ministry of Transportation and Communications would use the time to find ways to reinforce side slopes and study the possibility of building a rock shed.

Reopening only the east mainline would not severely affect operations, as long as trains are properly deployed, he said.

Trains operating through the damaged section of the line must observe a 40kph speed limit, and the TRA has installed monitoring instruments along the line to ensure the safety of train operations, Lin said.

The TRA yesterday canceled five train services that had been scheduled to travel through the section, but all services are expected to resume today, he said.

The TRA is reviewing guidelines governing the maintenance of side slopes, and would adopt stricter standards to monitor and inspect side slopes to ensure the safety at some key sections, Lin added.