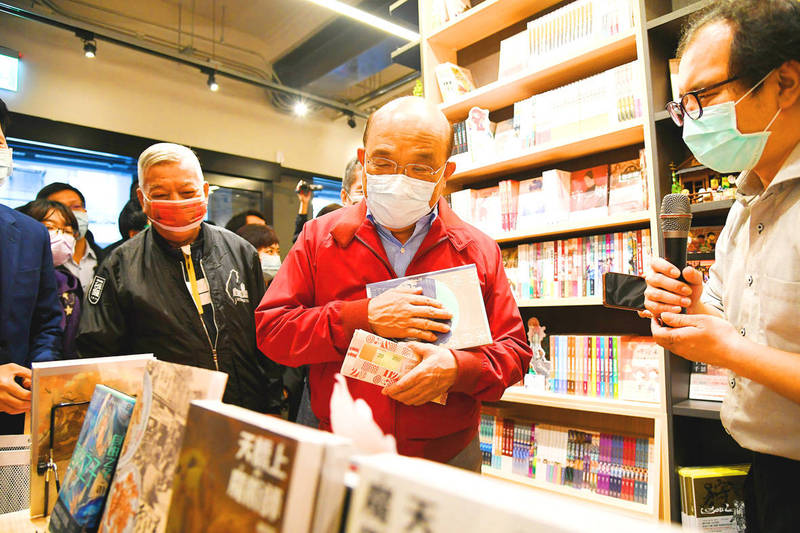 Premier Su Tseng-chang holds Triple Stimulus Vouchers in one hand and comic books that he plans to buy with the vouchers in the other during a visit to Taiwan Comic Base in Taipei yesterday. Photo: CNA

Taiwanese could pay NT$1,000 to receive NT$3,000 in stimulus vouchers in a program launched by the government in July to spur consumer spending, which has been hit hard by the COVID-19 pandemic in the first half of the year.

While visiting the Taiwan Comic Base in Taipei’s Datong District （大同）, Su said he has already spent all of his vouchers, so he borrowed the vouchers from his daughter to buy comic books that he promised to take back to his granddaughter.

One was Son of Formosa 2 （來自清水的孩子）, which Su said he promised to buy for his granddaughter.

The book tells the story of Tsai Kun-lin （蔡焜霖）, who was held as a political prisoner for a decade during the White Terror era.

The other comic books that Su bought are Tomoe’s Memories of Koumeya （友繪的小梅屋記事簿）, which depicts Taiwan’s food culture during the Japanese colonial era, for his mother-in-law; a set of graphic novel adaptations of selected stories from The Illusionist on the Skywalk and Other Stories （天橋上的魔術師圖像版套書）; volume one of Yan （閻鐵花）; Ocean Colored Polaris （海色北極星）; Remove （送葬協奏曲）; Beast of Clouds: The Guardian of Ancient Times （雲之獸：來自遠古的守護者）; and Farewell Albatross （再見信天翁）.

Noting the deadline for using the vouchers is until the end of this month, Su said people who have not yet spent their vouchers are advised to use them as soon as possible.

While there were no incidents of forged vouchers except one alleged case reported on Saturday, Su urged people to verify the authenticity of the vouchers by checking a bank stamp in the back of the vouchers before using or accepting them.