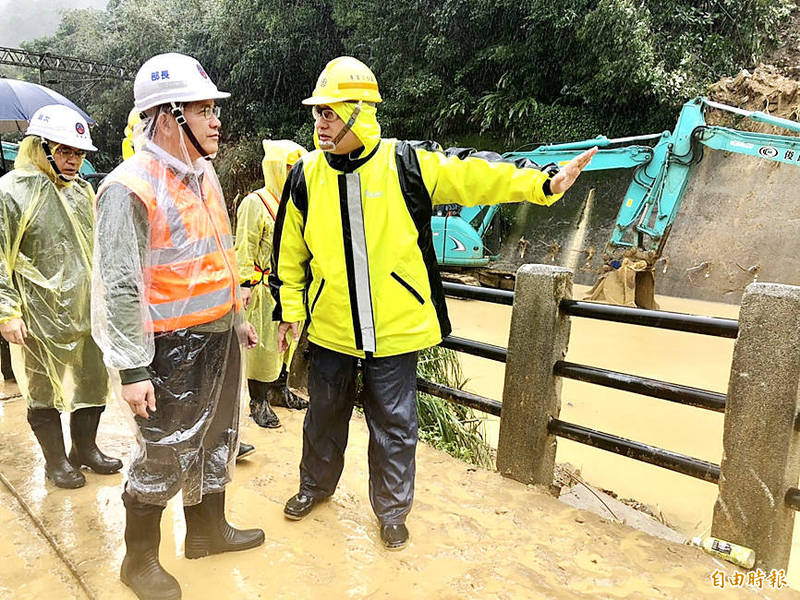 LANDSLIDE AFTERMATH: Minister Lin Chia-lung said that the plan to reopen a railway section would be changed, as collapses on upper slopes had expanded

Staff have been asked to reassess the time needed to reopen the damaged section of railway between Ruifang （瑞芳） and Houtong （猴硐） stations in New Taipei City, Minister of Transportation and Communications Lin Chia-lung （林佳龍） said yesterday following an inspection of the region.

Access to the section has been disrupted by a massive landslide on Friday last week triggered by days of heavy rainfall on Taiwan’s northeast coast.

The ministry had said that it might resume two-way operations on a single track by 5am on Sunday, but Lin said that timetable would be reset, as the situation is worse than had been estimated.

More time is needed, as the Taiwan Railways Administration （TRA） would have to work with the Central Geological Survey, Soil and Water Conservation Bureau, China Engineering Consultants Inc （中華顧問工程） and United Geotech Inc （聯合大地工程顧問） to stabilize slopes and install a drainage system, he said, adding that it would also take time to relay the railway tracks and reinstall power poles.

“We set the goal of reopening the section by Sunday based on the previous assessment of the time we might need to stabilize slopes,” he said. “However, collapses at the upper side slopes have expanded, so more time is required to build slope protection and drainage systems.”

Staff have been asked to reassess the time needed for the work based on the information they have gathered, he said, adding that safety remains the top priority.

Workers would need to prioritize their own safety and keep themselves warm, as chances of heavy rain remain high for the next few days, he said.

The ministry would spend three months researching the feasibility of a rock shed to protect the tracks in the area from rockfalls.

It would also review its management system to make sure side slopes are classified based on clearer standards, he said, adding that it would allocate more funds to monitor the land and improve risk awareness.

“The new management system should take environmental factors into consideration,” Lin said. “In this case, the region has had rain for more than a month.”

The TRA spent about NT$251 million （US$8.81 million） from 2017 to last year setting up a slope management system, which has classified more than 5,000 slopes along its main and branch lines in one of four categories.

The landslide last week has raised questions over why the area fell through the cracks in the system.

United Geotech was the contractor in charge of building the management system.

It said in a statement that slopes in the section were in Class C, defined as those that do not show any signs of instability, but the agency must still inspect and conduct routine maintenance of them, as well as monitor them closely as necessary.

The landslide occurred in an area that was neither geologically fragile nor in a zone prone to natural disasters, United Geotech said.

“We were notified by the TRA on Nov. 30 that cracks in retaining walls had expanded and bulged. We then took immediate action by knocking down damaged sections of retaining wall, temporarily solidifying slopes with sprayed concrete and dispatching personnel to monitor changes in the section,” the company said.

“The agency told us on Friday last week that there were clear signs of abnormality in the side slope [a measure of a hill’s steepness], and we went to the sections and assisted them in addressing the problems,” it said.