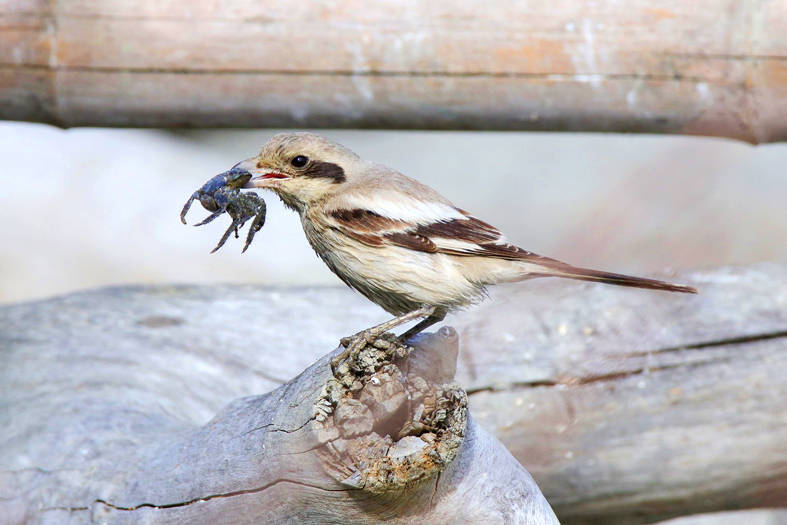 A steppe gray shrike in Tainan near Chiayi County’s Bajhang Creek holds a bug in its beak on Sunday last week. Photo provided by the Wild Bird Society of Tainan

A migratory bird typically only seen in Central Asia and South Asia, but never before sighted in Taiwan, was spotted in Tainan, a local bird-watchers’ group said on Friday.

A steppe gray shrike, Lanius pallidirostris, photographed by a bird-watcher surnamed Yang （楊） near the city’s border with Chiayi County’s Bajhang Creek （八掌溪） estuary on Sunday last week, was first thought to be a Chinese gray shrike, the group said.

After comparing information on the Chinese gray shrike with Yang’s photos, the group noticed that the bird was about 5cm shorter than Lanius sphenocercus and had no white spots on its wings, leading them to determine that it was a species of gray shrike previously unseen in Taiwan.

As to how the bird ended up in Taiwan, about 4,000km from where it is normally seen, the group speculated that it deviated from its migratory route due to its young age and inexperience, which is a common reason stragglers are spotted in the nation.

The group said they observed it catching small crabs and mudskippers to eat.

They urged bird-watchers interested in photographing the specimen not to feed it just for the chance of snapping a picture and not to park their vehicles in areas that might inconvenience local residents.

Separately, a rare albino Pacific swallow was spotted in Tainan, where many migrating birds make a stop at this time of year.

Weng, who often photographs birds in Tainan’s Taijiang National Park, said it was the first time he had ever seen an albino sparrow.