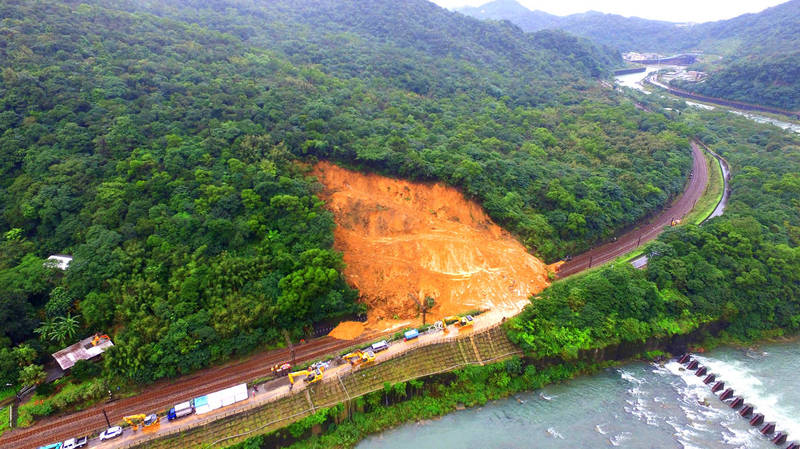 Debris from a landslide blocks a section of railway in New Taipei City yesterday. Photo courtesy of the Taiwan Railways Administration

FERRIED BY BUSES: The Taiwan Railways Administration said it expects to clear the railway line of debris on Tuesday at the earliest, as long as there are no new landslides

About 30,000 people yesterday were diverted to intercity buses after a landslide in northeastern Taiwan the day before damaged a railway line and resulted in disruptions to services provided by the Taiwan Railways Administration （TRA）.

The TRA said it is continuing to liaise with bus companies and hopes to increase the number of trips to expedite the transportation of passengers.

The landslide deposited 3,800m3 of rock, dirt and debris onto a section of tracks between Rueifang （瑞芳） and Houtong （猴硐） stations in New Taipei City at about 9am on Friday, disrupting transportation.

One train traveling near the site barely avoided running into the towering mound of debris, stopping about 30m from where the side of a hill alongside the tracks had collapsed, after being alerted by TRA staff monitoring the area, the agency said.

TRA Division of Construction Affairs Deputy Director Chen Tsung-hung （陳宗宏） yesterday said that the TRA was working to remove the obstacles from the railway line, despite heavy rain.

Weather permitting and without further landslides, the TRA expects to resume one-way transportation through the affected area by Tuesday at the earliest, he added.

People with tickets time-stamped from 8:30am on Friday for routes that would have taken them through the affected area would be eligible for a refund up until the day the obstacles have been removed, the TRA said.

People whose journeys have been delayed by the landslide by at least 45 minutes can visit any TRA station nationwide for a refund within a year, it added.

Those who had not reserved seats or did not experience such a delay can ride the same class of train once within one year, the TRA said.

The Directorate-General of Highways yesterday said it has asked major bus companies to divert buses from other routes to assist in transporting passengers to and from areas that are cut off by the landslide.

As of Friday, Metropolitan Transport Corp （大都會客運）, running from New Taipei City’s Sindian District （新店） to Yilan County, had assisted with 128 trips and carried up to 1,701 passengers, while Kuokuang Bus （國光客運）, running from the Yuanshan （圓山） area to Yilan County, had run 67 trips and carried up to 2,084 passengers, the highway authority said yesterday.

The highway authority has also arranged for Keelung Bus Co （基隆汽車客運） to divert four buses to drive along the 808 bus’ original route, assisting with the transportation of 840 passengers, as of Friday.

Travelers yesterday line up at the Hualien Railway Station to return their tickets after train services were suspended due to a landslide on the Yilan line. Photo: Wang Chin-yi, Taipei Times