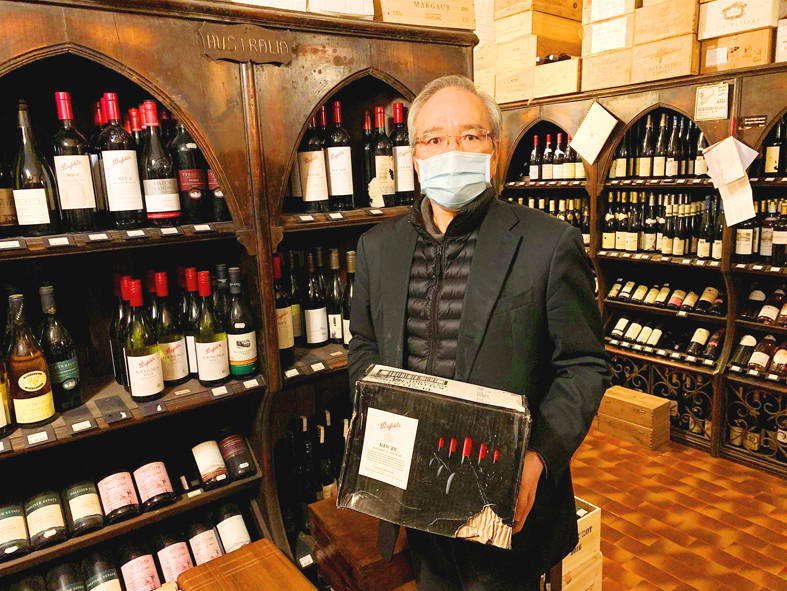 Ambassador to the Holy See Matthew Lee holds a box of Australian wine he purchased in Rome on Tuesday. Warning: excessive consumption of alcohol can damage your health Photo: screen grab from Facebook

‘FREEDOM WINE’: Taiwanese are empathetic of Australians, the president said, while lawmakers called on their constituents to drink Australian wine to show their support

By Lin Chia-nan and Kayleigh Madjar / Staff reporter, with staff writer and CNA

Taiwan would take action to back Australians at a time when they are “under tremendous pressure,” President Tsai Ing-wen （蔡英文） said yesterday, as tensions between Australia and China heated up.

Taiwan and Australia are like-minded nations, sharing the common values of democracy, freedom and human rights, while their economic and trade relations have also become close, she said.

Canberra has been voicing support for Taiwan’s international participation, Tsai said, and Taiwanese are empathetic and supportive of Australians at a time when they are under tremendous pressure.

The government would deliberate the best means to let Australians feel the friendship of Taiwanese, she said.

Canberra-Beijing ties have soured after a series of trade and diplomatic disputes.

Beijing on Saturday last week started imposing import tariffs of up to 212 percent on Australian wine, accusing Australia of dumping its wine on the Chinese market.

Canberra said that it was “extremely disappointed” by the decision.

Chinese Ministry of Foreign Affairs spokesman Zhao Lijian （趙立堅） on Monday posted on Twitter a doctored photograph showing a grinning Australian soldier holding a bloody knife to the throat of an Afghan child holding a lamb. The caption read: “Shocked by murder of Afghan civilians & prisoners by Australian soldiers.”

Australian Prime Minister Scott Morrison demanded that China remove the photograph and apologize for the “repugnant post,” but was rejected by Beijing.

Over the past few days, many government agencies and Internet users have shown their support for Australia by sharing photographs of Australian wine on social media.

“Australian wine will be featured at a White House holiday reception this week. Pity vino lovers in China who, due to Beijing’s coercive tariffs on Aussie vintners, will miss out. #AussieAussieAussieOiOiOi!” the US National Security Council wrote on Twitter on Tuesday.

The Ministry of Foreign Affairs yesterday posted on Twitter a photograph of two bottles of wine, with a caption that read: “We stand in solidarity with #Australia by serving #FreedomWine at @MOFA_Taiwan.”

The Australian Office in Taipei is to mark its 40th anniversary next year, showing that the bilateral friendship is steadfast and enduring, ministry spokeswoman Joanne Ou （歐江安） said in a statement.

Taiwan and Australia stand stronger together, and would continue to deepen their partnership to defend their shared values and maintain regional stability, she said.

Meanwhile, lawmakers joined their counterparts from around the world in calling on their constituents to drink Australian wine this month as part of a campaign to rebuff China’s tariffs.

The Inter-Parliamentary Alliance on China, a group of more than 200 lawmakers from 19 nations, on Tuesday released a video urging people to “join us in standing against [Chinese President] Xi Jinping’s （習近平） authoritarian bullying” by buying Australian wine.

As to whether any Taiwanese lawmakers would join the alliance, Lo said that some have applied, but their applications are under review.

Independent Legislator Freddy Lim （林昶佐） said that he believes some would join when the time is right.

Ambassador to the Holy See Matthew Lee （李世明） also joined in the campaign on Tuesday by buying a box of Australian wine.

Lee on the embassy’s Facebook page posted a photograph of himself holding the box of wine, along with the message: “Fraternity is not a trend or a fashion ... but the result of concrete acts,” echoing Cardinal Pietro Parolin’s presentation of Pope Francis’ October encyclical Fratelli Tutti.

Democratic Progressive Party Legislator Chiu Yi-ying, third left, and other legislators in Taipei yesterday show their support for Australia in its trade dispute with China by holding bottles of Australian wine. Photo: screen grab from Facebook