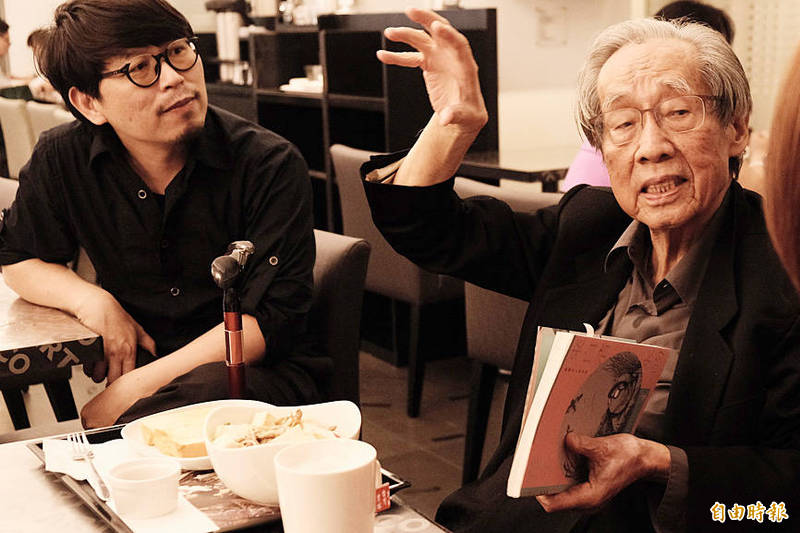 In the early 1950s in Taiwan, 19-year-old Tsai Kun-lin （蔡焜霖） was arrested and jailed after joining a book club. The young man spent more than a decade on Green Island （綠島）, building the prison that held him as a political enemy of the authoritarian rulers who would hold Taiwan under martial law until 1987.

Decades later, a 90-year-old Tsai is living in Taiwan’s thriving democracy, but said that a book club has once again become an act of resistance.

Tsai said that he agreed to join Katthveli because “once there were such people in Taiwan who risked their lives to read books and pursue the truth.”

“Especially when Hong Kong is facing persecution from China, and Taiwan is threatened by China. It’s important to advise young people what kinds of books they should read,” he said.

Participants from around the world can join via Jitsi, an encrypted communication app that requires no sign-in.

Users are sent a link and advised to use false names if they have personal safety concerns, festival curator Aephie Chen （陳繪彌） said.

The privacy measures for the online club, an initiative of the Taiwan UK Film Festival, were deemed necessary given the topics and the expectation that it would probably be monitored by Chinese authorities.

In Hong Kong, to discuss topics such as independence and activism is possibly illegal, and the security measures reflect the growing threat to those who advocate democracy.

Over the past 18 months, Hong Kong has dramatically changed, wracked by pro-democracy protests and a resulting crackdown by Beijing with a National Security Law that has in effect outlawed dissent.

The crackdown had the support of the Hong Kong Legislative Council and since then, more than 10,000 people have been arrested, with dozens held under the national security legislation. At least 2,300 people have been prosecuted for a variety of protest-related charges.

Advocating for independence or protesting against the government is largely illegal and sensitive books have been removed from shelves.

Taiwan has become a refuge for a small, but growing number of Hong Kong pro-democracy protesters.

“Taiwan lived through the White Terror before it came to this peaceful new era today,” Tsai said. “However, since 1997 — Hong Kong’s return to Chinese sovereignty — I am more pessimistic [about Hong Kong].”

There are mutual lessons for the two locales as Hong Kong moves away from semi-autonomy to strict Beijing-control, while Taiwan leaves its period of martial law further behind.

Chen said that she sees Tsai’s persecution happening again with the youth of Hong Kong.

“Every generation has to reimagine the concept of freedom,” she said.

Chen, the daughter of an environmentalist father forced to leave Taiwan during martial law, watched in horror at the crackdown in Hong Kong and then in sadness, as she felt the world start to lose interest.

She felt driven to share its story and how Taiwan could help, but said that adding a Hong Kong film to the festival’s lineup would not do it justice.

The book club was born to explore the history of danger in Hong Kong and Taiwan by giving people the time and space to read and research.

Chen invited Lam to speak to the club. The 64-year-old Hong Kong bookseller disappeared into Chinese custody for half a year in 2015 for selling banned books and last year fled to Taiwan after the territory announced plans to approve extraditions to China.

Lam said that it is important “to delve deep in these clubs to get to know the whole context of the problem, not just the surface.”

He has chosen seven books for the discussions, including titles on the history of the Chinese government, the Jewish diaspora and the cultural influence of the Chinese Communist party on Taiwan.

“It’s important to understand the history and culture of all of it, so you will understand why China is China today,” he said.

The book club is to begin on Dec. 1 with an interview with Lam. Tsai is to speak on Dec. 12.