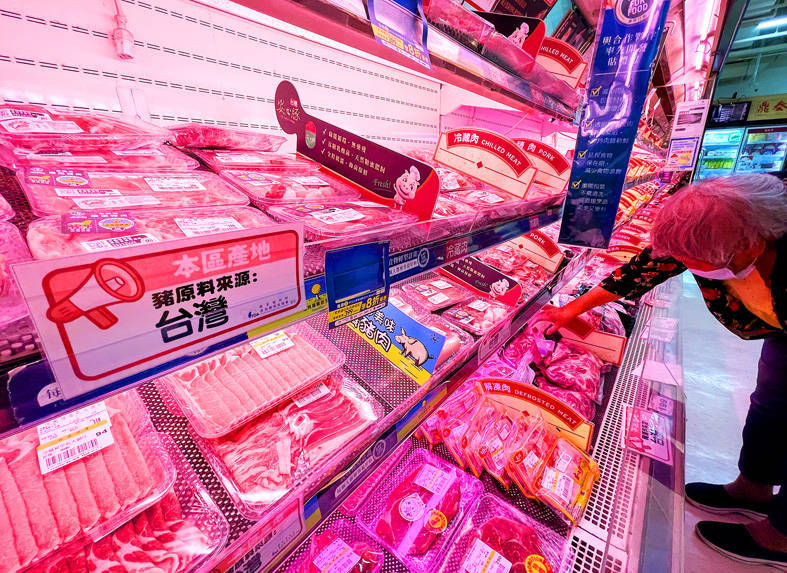 LABELING FINES: The FDA said products without clear labeling would draw fines of NT$30,000 to NT$3m, while misleading labels would be fined NT$40,000 to NT$4m

The government is to institute five measures to manage imports of US pork containing ractopamine, which are to be allowed from Jan. 1, Premier Su Tseng-chang （蘇貞昌） said yesterday.

Although the animal feed additive is banned for use in pigs in Taiwan due to safety concerns, President Tsai Ing-wen （蔡英文） on Aug. 28 announced that the nation would ease restrictions on imports of US pork containing traces of the drug within certain limits.

The first measure is that import requests for US pork would not be approved if a first-time applicant has not dispatched employees to visit the farms on which the hogs are raised, Su told a meeting at the Executive Yuan in Taipei.

The second measure is that US pork is to be subject to the Standard Classification of Commodity of the Republic of China Code, with the different cuts of meat identified by the code to increase to 67 items from 22, Su said.

Third, inspections of US pork imports would be conducted on a batch-by-batch basis, he said.

Fourth, all of the items of each package, down to the labeling, must meet global standards, Su said.

Fifth, importers that fail to label products according to the regulations, apply false labeling or fail to pass inspection standards would face steep fines, he said.

It is irrelevant how importers label the meat — whether they use government-produced stickers, their own stickers or simply write the details on the package — as long as the details are accurate and complete, Su said.

Deputy Minister of Health and Welfare Hsueh Jui-yuan （薛瑞元） said that the severity of the fines would scale with the size of the offending company.

Funding of NT$320 million has been earmarked, with NT$260 million to go to local governments to subsidize inspection costs and train employees, and the remainder to border control and inspection offices, Su said.

“If US pork with ractopamine must be imported, then labels must clearly show whether there are traces of the additive in the meat,” Lin said, adding that the KMT does not accept the Executive Yuan’s decision and would continue to block Su from taking the podium today to deliver a report, unless he apologizes on behalf of the Democratic Progressive Party （DPP）, which the KMT has accused of performing a U-turn on the issue.

During the administration of former president Ma Ying-jeou （馬英九）, the DPP, then in opposition, opposed imports of US pork containing the leanness-enhancing additive.

The Taiwan People’s Party said that the Executive Yuan’s measures are “half-assed.”

The Executive Yuan was unable to provide an answer to the simple question of whether imported packaging would be clearly labeled to allow people to check whether it contains ractopamine, it said.