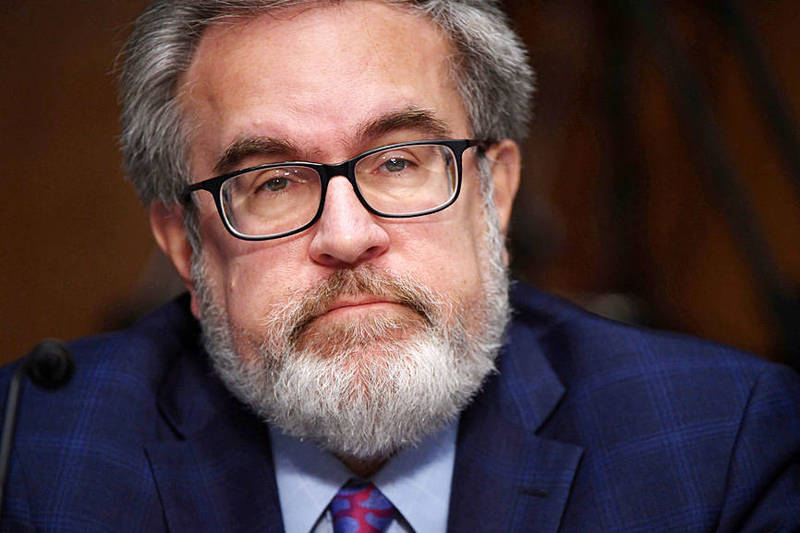 Environmental Protection Agency Administrator Andrew Wheeler testifies at a hearing in the Dirksen Senate Office Building in Washington on May 20. Photo: Reuters

COOPERATION: Taipei will continue to promote visits by US officials and collaborations on environmental issues with the future US administration, the foreign ministry said

/ Bloomberg and staff writer, with CNA

The Ministry of Foreign Affairs （MOFA） yesterday expressed regret over the cancelation of a planned visit to Taiwan next month by US Environmental Protection Agency （EPA） Administrator Andrew Wheeler, but added that cooperation on environmental initiatives would continue.

“Due to pressing domestic priorities at home, Administrator Wheeler’s visit to Taiwan has been postponed,” EPA spokesman James Hewitt said on Tuesday by e-mail.

Wheeler’s trip was originally planned following several high-level visits by US officials to Taiwan in the past few months, as well as stepped-up arms sales.

Taiwan regretted the cancelation, ministry spokeswoman Joanne Ou （歐江安） said in a text message yesterday, adding that Taipei would continue to promote future Cabinet-level visits and collaboration on environmental issues with the incoming administration of US president-elect Joe Biden.

In Washington, Representative to the US Hsiao Bi-khim （蕭美琴） on Tuesday also expressed regret over the cancelation of the trip, but added that Taiwan and the US would continue their cooperation on environmental initiatives.

Wheeler and his delegation had planned to visit Taiwan for three days to discuss a wide range of topics, such as ocean trash, air quality and child health, media reports said.

The visit had drawn scrutiny in the US for its potentially high price tag, with a charter flight planned to transport Wheeler and other EPA staff to Taiwan because of COVID-19 concerns.

A separate trip by Wheeler to Latin American countries, including possibly Costa Rica and the Dominican Republic, is still expected just ahead of Biden’s inauguration on Jan. 20.

Hewitt said the EPA would be asking the agency’s inspector general to probe the disclosure of details surrounding Wheeler’s Taiwan travel plans, after a New York Times report on the cost concerns.

“It is disturbing that a government official would leak deliberative schedules to the New York Times that could jeopardize both international diplomacy and personal security,” Hewitt said.

Two high-level US officials have visited Taiwan in recent months.

In August, US Secretary of Health and Human Services Alex Azar became the highest-ranking US official to travel to Taiwan since the US broke off ties with Taipei in 1979.

Both visits spurred angry reactions from Beijing, with Taiwan a focal point for spiraling tensions between the US and China.

There was speculation that Wheeler canceled his trip due to an unannounced visit by US Rear Admiral Michael Studeman, director of intelligence of the US Indo-Pacific Command, to Taipei on Sunday.

However, Minister of Foreign Affairs Joseph Wu （吳釗燮） disputed the speculation on the sidelines of a legislative meeting, saying the two matters were unrelated.

Studeman arrived at Taipei International Airport on a chartered plane for a three-day visit.

The plane departed from the same airport at about 7:10pm on Tuesday, according to photographs taken by local media.

The ministry did not confirm or comment on Studeman’s visit.