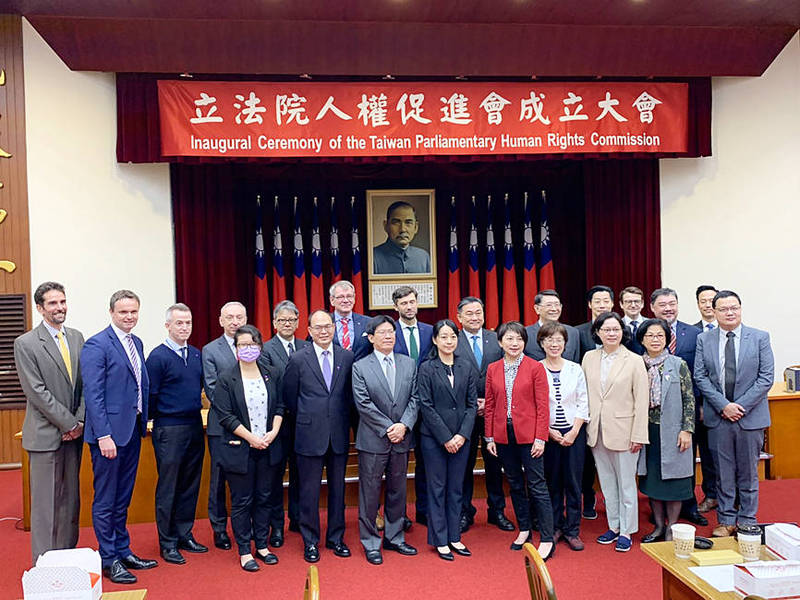 Legislators and guests participate in the inauguration of the Taiwan Parliamentary Human Rights Commission at the Legislative Yuan in Taipei yesterday. Photo: CNA

Lawmakers yesterday at the legislature in Taipei said that their primary mission would be to aid Hong Kongers in their struggle against Chinese oppression as they attended the inauguration of the Taiwan Parliamentary Human Rights Commission.

In his opening remarks, Democratic Progressive Party （DPP） Legislator Wang Ting-yu （王定宇）, initiator and chairman of the commission, said that this year has been exceptional for people all over the world.

Everyone is facing the COVID-19 pandemic together, yet at the same time, human rights are being restricted, Wang said.

In Hong Kong, Joshua Wong （黃之鋒）, Agnes Chow （周庭） and other young democracy advocates are being persecuted, but they are not exceptional cases, rather they are part of a larger trend of human rights violations at the hands of Beijing, he said.

People are used to tracking a nation’s development with measures such as GDP, but hopefully in the future human rights would instead serve as the barometer, he added.

Legislative Yuan Secretary-General Lin Jih-jia （林志嘉） said that human rights are an extremely important guidepost for Taiwan, which it has over the years worked tirelessly to advance as part of its democracy.

The nation must shine brightly on the world stage, Lin said, adding that a vital mission of the legislature is to facilitate parliamentary friendship groups with nations worldwide.

The commission would communicate with the world through the language of human rights with its advocacy and actions, he said.

The biggest difference between Taiwan and China is the former’s democracy and freedom, he added.

Beijing even goes so far as to suppress human rights, Lin said, pointing to the “brave young people” fighting for freedom and democracy in Hong Kong.

They are paying such a high price for their fight against an autocratic government and China’s oppression of Hong Kongers holds a particular significance for Taiwan, he said.

Taiwan People’s Party Legislator Lai Hsiang-lin （賴香伶）, vice chairwoman of the commission, said that in the past few days the Hong Kong government has been cracking down on young democracy advocates, putting Taiwan on high alert.

Taiwanese hope never to have to live in the shadow of “one country, two systems,” Lai said.

Hong Kong’s democratic system used to outshine Taiwan and serve as an example, but now it is Taiwan that is upholding the beacon of democracy in Asia, she said.

Taiwanese must adhere to this saying, advancing human rights at home while working with others to safeguard people’s rights around the globe, he said.