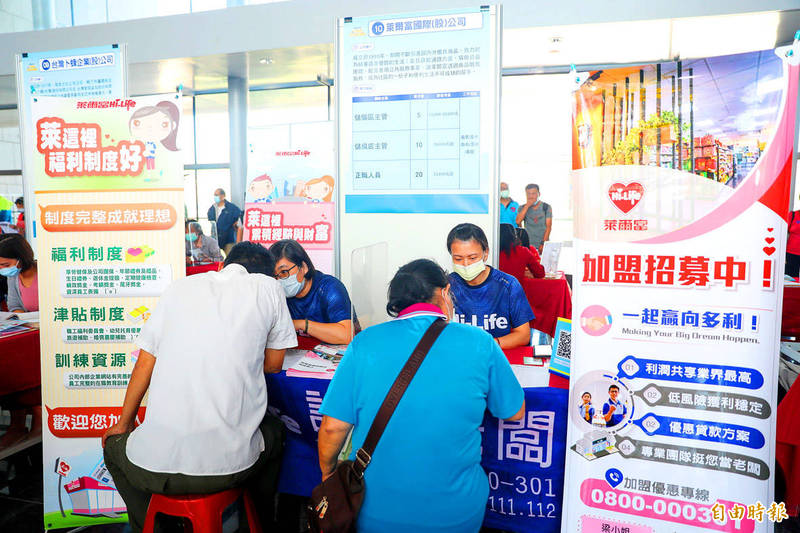 Jobseekers speak with recruiters from a convenience store chain at a job fair organized by the Taichung City Government for middle-aged and senior people in Taichung on Thursday. Photo: Tsai Shu-yuan, Taipei Times

The nation’s unemployment rate last month dropped to 3.8 percent, falling for the sixth consecutive month, as fewer people quit their jobs, although more people became unemployed due to business downsizing or closures, the Directorate-General of Budget, Accounting and Statistics （DGBAS） said yesterday.

The data represented a fractional 0.03 percentage point retreat from one month earlier as the effects of the COVID-19 pandemic continued to subside, but has not disappeared altogether, the statistics agency said.

“The job market is quite stable, even though it has not fully recovered to the pre-pandemic level,” DGBAS Deputy Director Chen Hui-hsin （陳惠欣） said.

The reading after seasonal adjustments stood at 3.77 percent, also lower than 3.78 percent one month earlier, affirming a slow, but steady improvement, the agency’s monthly report showed.

The hospitality sector has mostly come out of the woods judging by their staffing size from a year earlier, while construction and real-estate sectors appeared unharmed, Chen said.

The working population grew by 48,000 since the government lifted major social distancing requirements in June, allowing people to gather, shop and travel domestically, she said.

The number of unemployed people fell to 455,000, shrinking 0.66 percent from one month earlier, as the number of people who quit decreased by 3,000, the agency said, adding that the number of first-time jobseekers and people who lost seasonal jobs both fell by 1,000.

However, the number of people who lost their jobs due to business downsizing and closures gained 2,000, it said.

The average period of unemployment was 22.9 weeks, longer than 20.9 weeks one month earlier, with first-time jobseekers taking 23.5 weeks to land a position, the report found.

A breakdown of the figures by education level showed that university graduates had the highest unemployment rate at 5.57 percent, followed by high-school graduates at 3.42 percent and graduate degree holders at 2.94 percent, the report showed.

People with junior-high school education had the lowest unemployment rate at 2.66 percent.

The unemployment rate was lowest for people aged 45 to 64 at 2.25 percent.