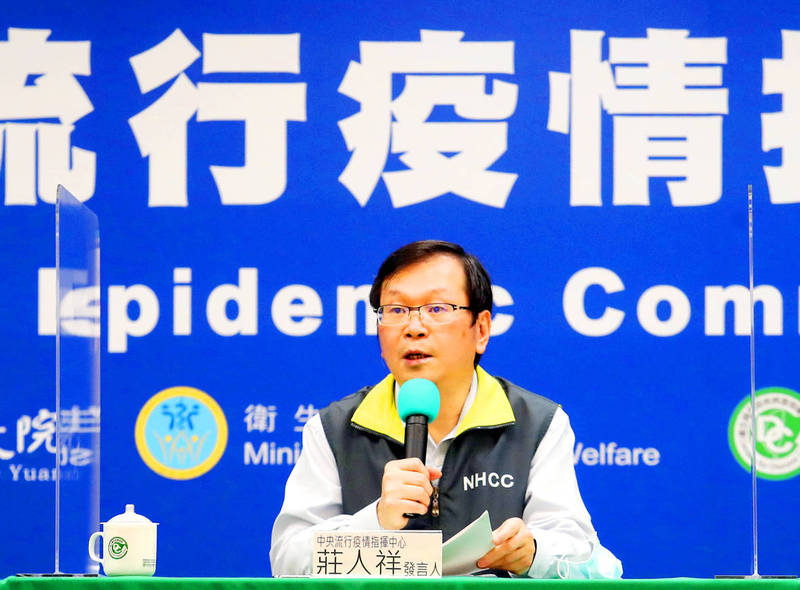 Medical practitioners and disease prevention personnel would be given priority in receiving COVID-19 vaccinations when they become available, the Central Epidemic Command Center （CECC） said yesterday, adding that it is working toward starting vaccinations in the first quarter of next year.

Centers for Disease Control （CDC） Deputy Director-General Chuang Jen-hsiang （莊人祥）, who is the CECC’s spokesman, said that there have been fewer reported cases of children infected with COVID-19 and most of them only experience mild symptoms, so they would not be included in the center’s priority groups for COVID-19 vaccination.

Priority would be given to medical practitioners, followed by disease prevention personnel, including airport quarantine officers; people whose duty is to maintain social stability, including police and military police; long-term care center workers and social workers; and military personnel, he said.

As for access to the vaccine according to age, people aged 65 or above would be given first priority, followed by people aged 19 to 64 with a high-risk chronic disease, rare disease or catastrophic illness, and healthy adults aged 50 to 64, he said.

As all COVID-19 vaccine candidates are still undergoing clinical trials, the CECC has to diversify risks by trying to secure vaccines in three ways: the global COVAX platform, supporting domestic vaccine makers and negotiating bilateral agreements with other global vaccine manufacturers, Chuang said.

The COVAX platform initially listed nine available vaccine candidates, but it later opened up some vaccine options for participating countries that signed an optional purchase agreement, he said.

Additional options include the BNT162b2 vaccine candidate developed by Pfizer Inc and BioNTech SE, the AZD1222 vaccine candidate by the University of Oxford and AstraZeneca PLC, and a vaccine by Sanofi SA and GlaxoSmithKline PLC, Chuang said, adding that the CECC would contact those companies.

Asked when COVID-19 vaccines would become available in Taiwan, he said that a more conservative estimation would be before the middle of next year, but the center is working toward starting vaccinations in the first quarter of next year.

Asked whether the policy of requiring all travelers, including overseas Republic of China （ROC） citizens, to provide a negative result from a polymerase chain reaction （PCR） test within 72 hours before traveling to Taiwan starting on Dec. 1 is against the spirit of the National Health Insurance （NHI）, Chuang said that the policy does not ban citizens from returning to Taiwan.

If ROC citizens test positive overseas and receive medical treatment, they can still apply for cost reimbursement from the NHI system when they return, he said.

People who cannot obtain a negative PCR result in their host country due to non-personal reasons can apply to be tested at their own expense upon arrival in Taiwan, Chuang said.

Regarding ROC citizens who test positive abroad, but wish to return to Taiwan for treatment, the center would assess the possibility of letting them apply as special cases, he added.

Separately yesterday, the CECC confirmed six new imported cases of COVID-19 in travelers from Indonesia, the US and the Philippines.

Chuang said that four are Indonesian women in their 20s who came to Taiwan for work on Oct. 7 and 8.

They were tested for COVID-19 on Friday and Saturday upon completing their quarantine, and their test results came back positive yesterday, he said.

One of the imported cases is a Taiwanese man in his 20s, who traveled to the US for study in the middle of August, and on Nov. 6 started to experience symptoms, but treated himself, Chuang said.

He reported his symptoms and was tested at the airport upon arrival in Taiwan on Friday, he added.

The other case is a Filipino woman in her 30s who came to Taiwan for work on Nov. 8, Chuang said.

She was tested for COVID-19 on Saturday before completing her quarantine, and the test result came back positive yesterday, he said.