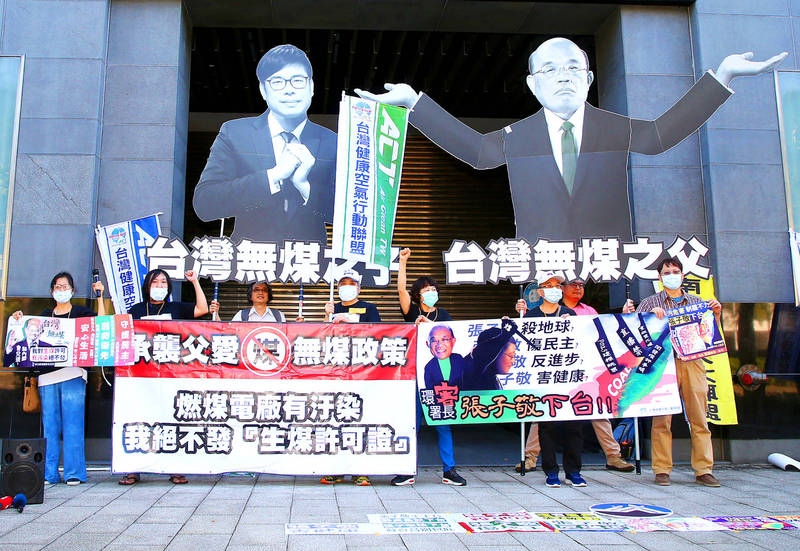 OR THE PREMIER: Chang Tzi-chin has failed to perform his duty to protect the environment in the 14 years he has been deputy minister or minister, the groups said

Either Environmental Protection Administration （EPA） Minister Chang Tzi-chin （張子敬） should resign, as the agency is acting as it were simply the public relations division of the Ministry of Economic Affairs （MOEA）, or else Premier Su Tseng-chang （蘇貞昌） should go, a group of environmental advocates said yesterday.

The group held a news conference outside the EPA in Taipei yesterday morning, ahead of the “Autumn Struggle” （秋鬥） protest march in the afternoon.

These are the common values of those who take part in the yearly march, he said.

Air pollution is a “very serious” problem in the south and center of Taiwan, and the public’s freedom and right to breathe are being “poisoned,” he said.

Chang should take responsibility for his missteps and step down, but if he does not, then Su should do so, Lee said.

Chants of “Step down, Chang Tzi-chin,” and “If Chang Tzi-chin does not step down, Su Tseng-chang should,” were among those shouted during the news conference, while participants held signs calling Chang the “minister of environmental damage,” and accusing him of being “anti-progressive” and “hurting democracy.”

Chang’s statements about the importance of the nation’s economy makes him look like the head of the MOEA’s public relations division, Air Clean Taiwan chairman Yeh Guang-perng （葉光芃） said.

Environmental protection should be the top priority of the head of the EPA, he said.

“What exactly has Chang done to address air pollution during his 10-plus years as deputy minister and minister of the agency?” Yeh asked.

Chang served as deputy minister from January 2006 to January last year, and was then named minister.

During his campaign for the Kaohsiung mayoral by-election in August, the Democratic Progressive Party candidate, former vice premier Chen Chi-mai （陳其邁）, said reducing air pollution would be a priority if he were elected, alliance general coordinator Hung Hsiu-chu （洪秀菊） said.

However, while Chen is aware of the serious air pollution in Kaohsiung, he has not taken action, she said.

The EPA is “just a rubber stamp of the government’s development agency,” Alliance for the Rescue of Datan Algae Reefs member Chen Hsien-cheng （陳憲政） said, urging the government to listen to environmental groups.