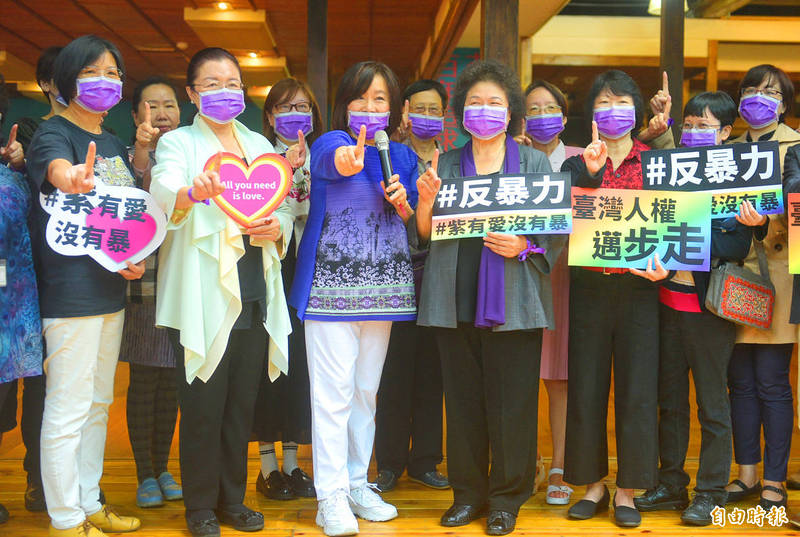 The commemoration, held at the Tsai Jui-yueh Dance Research Institute in Taipei, comes ahead of the UN’s International Day for the Elimination of Violence Against Women on Wednesday next week.

At the event, Control Yuan President Chen Chu （陳菊）, the commission’s chairwoman, talked about Tsai and her husband, Lei Shih-yu （雷石榆）, in recalling Taiwan’s democratic transition, during which many people were persecuted and killed.

“We want people to remember the history of the struggle for freedom, so that we can have the will to defend and love our freedom and democracy, which came about only through hard-fought efforts,” Chen said.

A documentary on Tsai’s life was shown at the commemoration, with many in attendance wearing purple ribbons to raise awareness about violence against women.

Tsai’s story has come to represent the victims of the White Terror era, when in 1949 the KMT arrested Lei, an Indonesian-born poet, on suspicion of being a communist agent and deported him to China, separating him from Tsai and their son for more than 40 years, Chen said.

Tsai was also arrested, presumably for maintaining contact with Lei, and incarcerated in Taipei and later for three years on Green Island, Chen said.

Tsai was released in 1953 and founded a dance studio in Taipei, but she and her school were under constant surveillance by the authorities, who disrupted her work and performances, and prevented her from leaving Taiwan.

“Tsai and Lei’s love story lasted through tragic circumstances for many decades, and it has moved many people. It happened because of state violence against a woman,” Chen said.

“We must pursue human rights at all times. It is not possible to reach into every corner to hear every cry for help and sad story. It is up to everyone to be vigilant and strive to listen for the voices of society’s underprivileged, and find ways to help them,” she added.