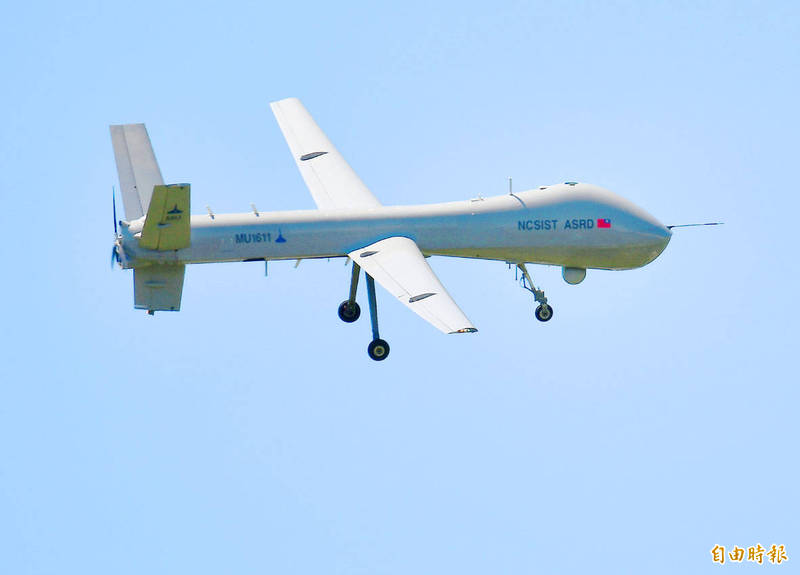 The indigenous Tengyun, an uncrewed tactical reconnaissance and combat drone, is expected to enter mass production by 2024, Ministry of National Defense （MND） officials told a meeting of the legislature’s Foreign Affairs and National Defense Committee yesterday.

Asked by Democratic Progressive Party Legislator Chuang Jui-hsiung （莊瑞雄） about the time line for the drone’s rollout, Deputy Minister of National Defense Chang Che-ping （張哲平） said that the Tengyun would have to undergo testing before it can be mass produced.

Developed by the Chung-Shan Institute of Science and Technology, the drone completed its initial test flight in April 2018.

Evaluations of military operation capabilities are required before production can start, Chang said, adding that the process would take about one-and-a-half years.

Institute deputy director Lo Yi-chung （羅意中） said that an integration system for drone equipment — such as photoelectric sensors and radars, which are domestically produced — is still under development.

Research and development of the system would be arranged in the first half of next year, before combat assessments of the drone in the second half, Lo said, adding that mass production could begin in 2024.

Asked if the US’ announcement that it would sell four MQ-9B SeaGuardian drones to Taiwan would affect the development of the Tengyun, Chang said that the two drones have different functions.

The US Department of State on Nov. 3 approved the sale of four MQ-9Bs, related equipment and personnel training to Taiwan for US$600 million.

The MQ-9B is a strategic drone with high flight endurance and long-range reconnaissance capabilities, Chang said, adding that the US model would complement the Tengyun, which is a tactical drone.

The increase came after Minister of National Defense Yen De-fa （嚴德發） early this month promised to negotiate a new testing schedule with the Civil Aeronautics Administration, which initially allocated just 70 minutes per day for test flights, due to tight air space arrangements.

The military commissioned the government-owned Aerospace Industrial Development Corp （AIDC） to produce 66 Yung Yings by 2026 as part of efforts to boost the nation’s defense capabilities.

Asked by legislator and Chinese Nationalist Party （KMT） Chairman Johnny Chiang （江啟臣） when testing of the Yung Ying would be finished and production would start, an AIDC employee, who declined to be named, said that the production might start as early as November next year.