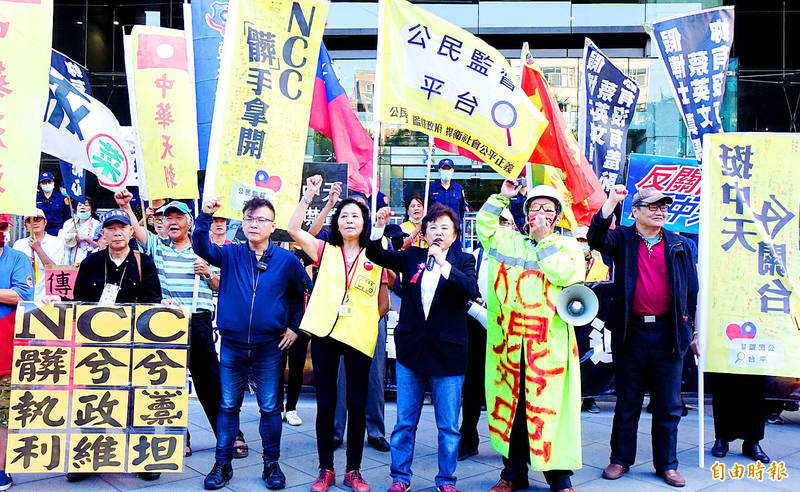 PRESS FREEDOM URGED: The NCC’s ruling was a warning to media outlets not to defy the government, a former GIO director during Chen Shui-bian’s administration said

Dozens of CTi News’ supporters yesterday rallied outside the National Communications Commission （NCC） in Taipei to protest the commissioners’ decision on Wednesday not to renew the news channel’s license.

Calling the decision political, protesters sprayed red paint over a Democratic Progressive Party （DPP） flag, and urged members of the public to defend freedom of speech and press freedom by attending a rally in Taipei on Sunday.

At the protest, former Chinese National Party （KMT） legislator Shen Chih-hwei （沈智慧） said the government had used the commission to shut down a news channel, and the reasons that it gave for the decision went completely against freedom of the press.

The commission even told the public which channel should replace CTi News in the channel No. 52 slot, Shen said.

“We have spent so many years fighting for the freedom of the press, and yet such freedom is taken away by a party formed by dissidents during the Martial Law era,” Shen said.

University professors of communications and journalism should come out and defend such freedom.

Chung Ching （鍾琴）, who served as Government Information Office （GIO） director-general during former president Chen Shui-bian’s （陳水扁） administration, said that Nov. 18, 2020, should go down in history as the “Day of National Shame,” as the government shut down a news channel because its internal controls had malfunctioned and shareholders were able to interfere with the news content.

All media owners try to influence the content of their outlet, and CTi News was no exception, she said.

The commission’s decision was meant as a warning to other media outlets not to defy the government, she said.

President Tsai Ing-wen （蔡英文） has taken a tough stand on cross-strait policy since she took office, and her administration does not tolerate any news media that challenge that policy, Chung said.

It has ensured that 80 percent of the nation’s broadcast media outlets sided with the pan-green camp on cross-strait issues, leaving it to handle the 20 percent that have not, she said.

“The NCC’s decision will have a chilling effect on the news media. If investors want to retain their ownership and stakes in media outlets, they had better behave,” she said.

The decision would also ensure that the KMT would no longer be a political threat to the DPP, she added.

There is nothing wrong with having channels supporting a pro-blue, pro-green or pro-China agenda in this nation, and the commission’s job is to make sure that people can freely access quality and valuable content, Chung said.

The government wants to make the public live in a “Truman Show world,” where it only shows what it wants you to know, she said, referring to the 1998 Jim Carey film.

In other developments, the Taipei City Police Department detained a man surnamed Tien （田） on criminal charges of insulting a public office after he was allegedly caught spraying green paint over an NCC flag outside the commission’s main office.

CTi News can continue airing programs until Dec. 11, when its license expires, the commission said.

CTi News has said it would file an administrative lawsuit against the commission.

In related news, the board of directors of the Taiwan Broadcasting System, the nation’s public broadcasting group, passed a resolution to form a special taskforce to pursue the chance to have its news channel take over the Channel 52 slot.