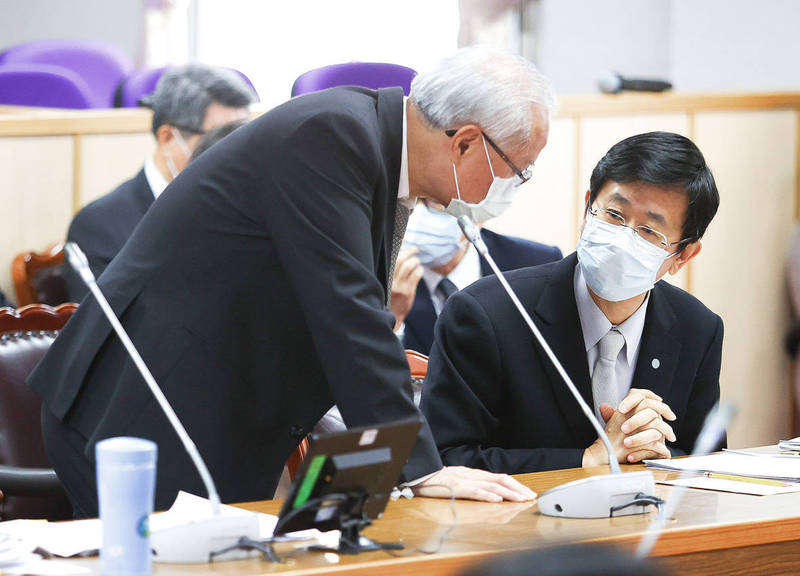 Ministry of Justice Investigation Bureau Director-General Leu Wen-jong, right, attends a meeting of the Legislative Yuan’s Judiciary and Organic Laws and Statutes Committee concerning a case involving the loss of 6.5kg of amphetamines to be used as evidence. Photo: CNA

REGULAR CHECKUPS: MJIB field offices have been ordered to examine their inventory of confiscated drugs to make sure that no other drugs are missing

The Ministry of Justice Investigation Bureau （MJIB） yesterday said that it would draft stricter regulations on the handling of confiscated drugs by law enforcement officials amid an investigation into 6.5kg of amphetamines that went missing while being transferred to a lab in New Taipei City.

An MJIB Keelung City Field Office officer, surnamed Cheng （鄭）, lost the haul in November last year when he was supposed to deliver it to an investigative laboratory in Sindian District （新店）, New Taipei City, but the case only came to light a few days ago, media reports said.

Cheng and another officer, as well as two supervisors, tested negative for amphetamines after a question-and-answer session with the MJIB on Friday last week, the bureau said at a briefing at the Legislative Yuan in Taipei.

It was an isolated case, MJIB Director-General Leu Wen-jong （呂文忠） told lawmakers, adding that the bureau would tighten regulations on the handing of evidence that involves drugs.

MJIB field offices were ordered to check their inventory of confiscated drugs to make sure that no other drugs are missing, the bureau said, adding that regular checkups would be carried out every three months from now.

In response to media reports claiming that the Keelung office breached the rule requiring that at least two officers be assigned when transporting drugs, the bureau said there is no such a rule.

However, the MJIB would start formulating more rigorous standard operating procedures for such tasks to ensure safer and more secure transfers, it said.

The MJIB will show no leniency to any personnel found guilty of the drug’s disappearance, it said.

The bureau on Wednesday issued a news release denying reports that Cheng tested positive for ketamine.