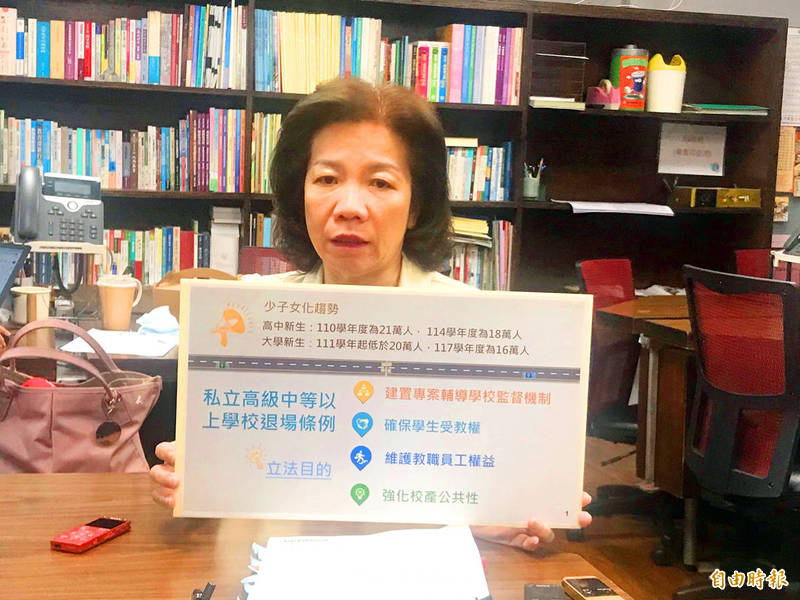 Department of Technological and Vocational Education Director Yang Yu-hui holds up a card showing the conditions that need to be fulfilled as part of a draft bill for disbanding private schools in trouble. Photo: Lin Hsiao-yun, Taipei Times

The Executive Yuan yesterday passed a draft act to govern the closure of private schools, in a bid to address low enrollment caused by Taiwan’s low birthrate.

The act — which would apply to all private senior-high schools and universities that are struggling to survive due to low enrollment — would authorize the Ministry of Education to set up a fund to help them gradually cease operations; subsidize students’ education, accommodation and transportation expenses; and pay the salaries and insurance of faculty.

Premier Su Tseng-chang （蘇貞昌） told the weekly Cabinet meeting that the government expects some of these private educational institutions to encounter financial problems within 10 years, but that the act would ensure that their closures are smooth transitions.

The act would also protect students in schools that are closing, he said.

Under the act, two categories of private schools would come under the ministry’s close scrutiny.

The first category is composed of schools “placed under alert” due to the schools having mild funding problems.

The second are schools that have severe funding problems — placing them beyond repair and requiring the ministry to give them special guidance.

The draft states that the ministry would establish the standards that determine whether an educational institution should be placed in the first or second category.

Schools in the second category would be announced to the public.

The draft states that if the institutions in the second category improve their financial situation within three years, they could be removed from the ministry’s watch list.

It states that if their finances fail to improve in three years, the ministry could order them to stop enrolling students.

Such schools should stop operations at the end of a school year.

Institutions in the second category to get its approval before finalizing procurement contracts of NT$1 million （US$34,701） or more, the ministry said.

Three faculty or staff members would be appointed to the school board to check whether the administration is truly working toward improving the institution’s financial situation, the ministry said.

The school board must be reformed after an institution stops enrolling new students, the ministry said, adding that the board would need to be composed of impartial third-party members who are assigned by the ministry so that they can assist with preparations for the closure of the institution.

The act would not require private schools to maintain a student body of 3,000 and would change the sunset clause, increasing the funding leading to closure, the ministry said.

More than 30 high schools and more than 10 universities have been placed on the first category list, Department of Technological and Vocational Education Director Yang Yu-hui （楊玉惠） said.

After the draft bill is passed by the Legislative Yuan, the ministry would release a list of schools that needs help for operation, she added.