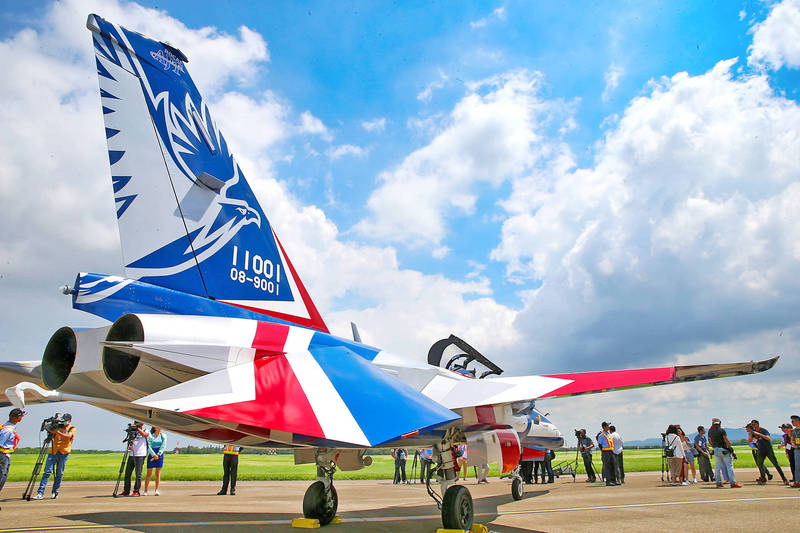 REPLACEMENTS ON THE WAY: Washington last year agreed to sell Taiwan 66 F-16Vs, with the first two fighters scheduled to be delivered in 2023, military sources said

The nation’s F-5 fighters would all be decommissioned by 2026, Democratic Progressive Party （DPP） Legislator Wang Ting-yu （王定宇） wrote on Facebook yesterday, after an F-5E crashed into the sea north of Taitung County’s Chihhang Air Base yesterday morning, killing its pilot.

The military has 46 F-5s in service — 14 F-5Es, 27 F-5Fs and five RF-5Es — and as most have been in use for a long time, plans to decommission them had been made earlier, and they would gradually replace by newer fighters, including F-16Vs and Yung Yings （勇鷹, Brave Eagle）, Taiwan’s first indigenous advanced jet trainer （AJT） between 2023 and 2026, he wrote.

Over the past four years, the military has gained an array of new weaponry for land, marine and air operations as part of the government’s efforts to increase the nation’s combat capabilities, he said.

An F-5E fighter with the tail number 5261 crashed less than two minutes after taking off at 7:29am and while its pilot, 29-year-old Chu Kuan-meng （朱冠甍）, was able to eject from the plane, he died of his injuries at 9:27am, the Ministry of National Defense said.

In related news, military sources said that Taiwan secured Washington’s consent last year to procure 66 F-16Vs to replace the old F-5s, with the US expected to deliver two of them in 2023, one single-seat and the other twin-seat.

The air force would conduct initial test runs of the two planes, and then the US would deliver the remaining F-16Vs in batches over the next few years, with all of the fighters expected to be delivered by 2026, the sources said.

The government plans to give the air force 66 Yung Yings to replace its AT-3 trainers and F-5s by 2026, as part of efforts to help pilots’ better transition into more sophisticated warplanes, such as F-16Vs, they said.

Air Force Chief of Staff Lieutenant General Huang Chih-wei （黃志偉） said that the F-5s in service are all up to standards in terms of mission-capable rates, and are mainly responsible for lead-in fighter training, including missions to gear military academy graduates up before they switch to frontline fighters.

The air force temporarily suspended operation of all its F-5s following yesterday’s crash.

Peng Suu-min （彭斯民）, a former flight safety consultant, said that the age of an aircraft should be irrelevant, as long as maintenance is properly carried out.

Observers have speculated that yesterday’s crash might be linked to its 40 years in service and accumulated flying time of 6,260 hours.

The US Air Force’s B-52 bombers have been in service since 1952, but are still used in many military operations, Peng said.

Speculators should not attribute yesterday’s crash to the age of the F-5E, as that would be an insult to the air force’s maintenance staff, Peng said, adding that new aircraft still has risks of accidents.