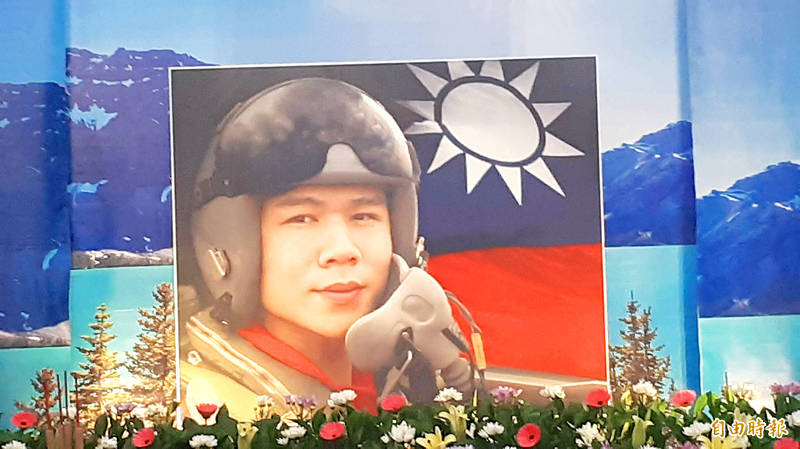 TAKEOFF INCIDENT: Chu Kuan-meng was a member of a band and loved fishing, the military said, adding that he was to be promoted from captain to major

Air force pilot Captain Chu Kuan-meng （朱冠甍） was killed yesterday after ejecting from his F-5E jet over the sea off Taitung County.

The jet from the 7th Tactical Flight Wing crashed into the water after Chu ejected. He was retrieved from the water and taken to Taitung Mackay Memorial Hospital, where he was declared dead.

He is survived by a wife and a one-year-old daughter.

The Taitung County Fire Department said that it was informed of a suspected jet crash off the Jialulan （加路蘭） area in Taitung City and confirmed the incident with the Ministry of National Defense at 7:55am.

A medical helicopter dispatched by the National Airborne Service Corps found Chu at about 8:30am.

The main cause of death is likely to be the central nervous system going into shock, coroners said.

Whether he sustained the injuries while ejecting from the aircraft or in landing requires further investigation, they said.

President Tsai Ing-wen （蔡英文） expressed her condolences to the family via Facebook.

She wrote that she has asked the ministry to look into the cause of the crash and assist Chu’s family as needed.

At a news conference at 10:40am, Major General Huang Chih-wei （黃志偉） said that the ministry has suspended all training flights and ordered all of its F-5s grounded for inspection.

Chu had taken off from Chihhang Air Force Base at 7:29am, Huang said.

Shortly after takeoff he reported the failure of his right-side engine, he said.

When asked whether Chu’s actions were to keep the jet away from residential areas, Huang said that standard procedure in such situations is to keep the plane airborne and try to return to base, only ejecting if that is not possible.

It should be instinctive for pilots to do all they can to keep a doomed plane from crashing into a populated area, he said.

However, an investigation is ongoing and a definitive answer cannot be provided at this time, he said.

The ministry wrote on Twitter: “The mission of guarding our airspace is tough, but our airmen stand ready even at this moment of grief.”

Chinese Nationalist Party （KMT） Chairman Johnny Chiang （江啟臣） wrote on Facebook that the party supports the ministry at this difficult time, but urged it to clarify the cause of the incident.

A decision in 2016 to replace F-5s with newer models has since been disrupted by the Tsai administration’s promotion of the indigenous fighter program, Chiang wrote.

Tsai must tell the public whether the indigenous fighter program would lead to an extension of the service life of the F-5s — which have been in service in Taiwan for more than 40 years — to avoid a gap in serviceable planes until manufacturing begins, he wrote.

The issue of aging equipment should not be brought to the fore by an accident, as happened in the tank crash in Kinmen County’s Lieyu Township （烈嶼） last month, Chiang said.

He called on the ministry to reconsider its funding allocations.

Taiwan manufactured the aircraft independently, at one point having the largest F-5 fleet in the world until it ended its production line.

Chu was a guitarist for a band and loved fishing, the military said.

He was in line for a promotion to major in January, it said.

The F-5E training jet from the 7th Tactical Flight Wing that crashed in Taitung County yesterday is pictured in an undated photograph. Photo courtesy of Chiu Ming-yuan via CNA