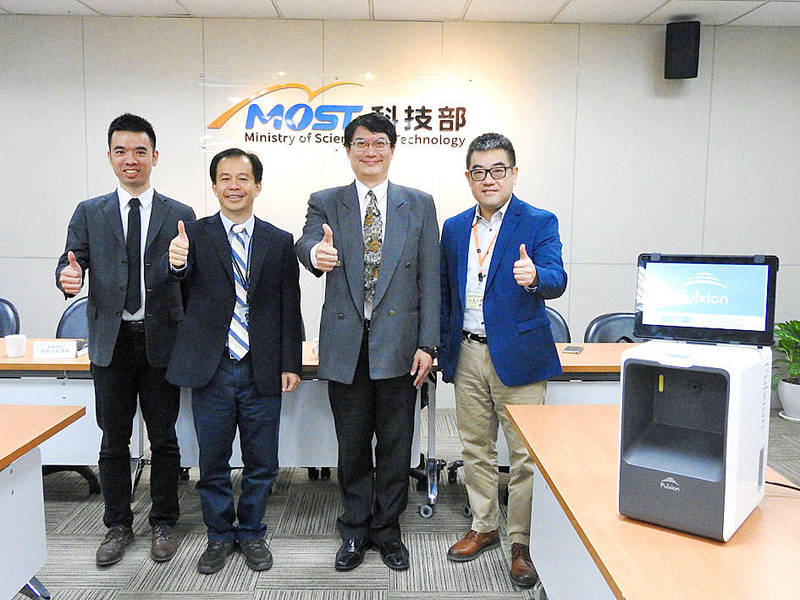 PULSTROKE: The device can deliver an assessment report in five minutes on a test subject’s risks of getting carotid artery stenosis and whether they need to visit a hospital

A research and start-up team yesterday introduced the world’s first quick-test imaging system for stroke and cardiovascular diseases that can deliver results in five minutes.

Stroke ranks among the five top causes of death in Taiwan and the US, claiming about 12,000 and 140,000 lives each year respectively, National Taiwan University （NTU） mechanical engineering professor Hsiao Hao-ming （蕭浩明） told a news conference at the Ministry of Science and Technology in Taipei.

Hsiao said that he had worked at US Abbott Laboratories, developing medical devices from 2001 to 2009, before returning to Taiwan.

About 85 percent of strokes are caused by ischemia, or a blockage in an artery that supplies blood to the brain, while carotid artery stenosis — a narrowing of the two major carotid arteries that carry blood from the heart to the brain — is an early indicator of stroke, he said.

To facilitate early detection of strokes and cardiovascular diseases, they worked together to develop an imaging device called Pulstroke.

The device takes a 30-second video of a subject’s neck and uploads the film to a cloud server for analysis, Hsiao said.

Within five minutes, the subject can receive an assessment report on their risks of getting carotid artery stenosis and determine if they should visit a hospital for a more detailed examination, he said.

The degree of stenosis affects the dynamics of blood flow, the subtle changes of which are reflected through pulsations and can be detected by the team’s image motion analysis, he added.

The system has accumulated more than 500 clinical cases, with a precision rating of 95 percent compared with results yielded by ultrasonic scanners, he said.

The team has obtained patents for the system in Taiwan and the US, and won two National Innovation Awards in Taiwan in 2016 and last year, Hsiao said.

The system’s hardware was refined when the team received more funding from the ministry last year, he added.

While the device only needs ordinary Webcams for taking images, the team’s core technology hinges on image motion analysis, image decomposition and reconstruction, feature extraction and an artificial intelligence algorithm, he said.

The firm is awating a medical device permit from the Ministry of Health and Welfare to make it commercially available, Hsiao said.

Instead of selling the system itself, the firm plans to promote its use at pharmacies and health checkup centers, with users being charged NT$200 to NT$300 per use, only about 10 percent of the cost of self-paid checks for carotid artery stenosis at hospitals, company CEO Thomas Hsu （許沛新） said.

The company would also seek cooperation with the health ministry to promote use of the system and integrate users’ data into the database of National Health Insurance Administration, Hsiao said.

The technology could also be used to develop other tools for detecting arrhythmia, arteriovenous fistula occlusion and Parkinson’s disease, he said.