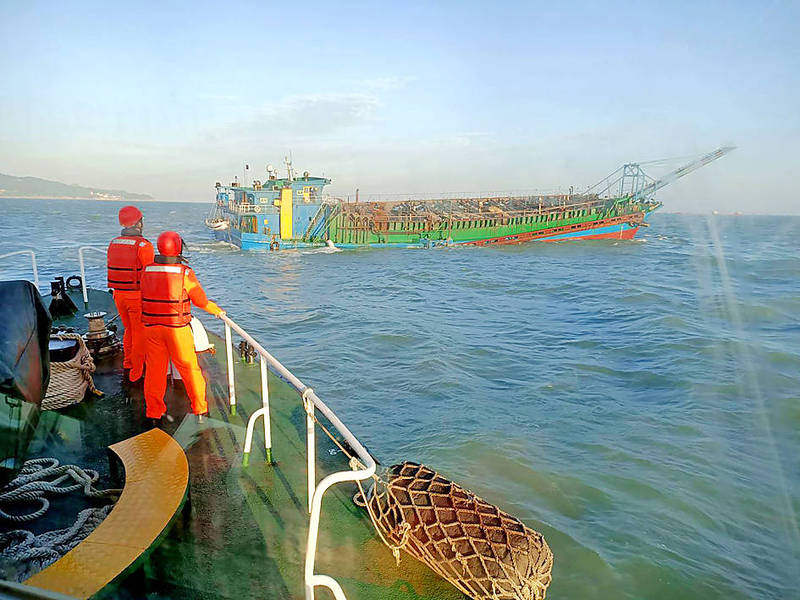 The Executive Yuan today is to discuss amendments that would increase penalties for illegal dredging, after hundreds of Chinese vessels were found allegedly looting sand near Matsu.

After determining whether they were engaged in military activity, the Coast Guard Administration on Tuesday worked with Chinese law enforcement to drive the vessels away, Lee told the Legislative Yuan’s Internal Administration Committee.

If there had been any military intent, the Chinese side would not have participated in their removal, he said.

The area within 6km of Matsu is restricted territory, Lee said, adding that the coast guard would chase away vessels that enter the zone illegally.

However, as the waters outside the area are in Chinese jurisdiction and Beijing also condemns the practice, the coast guard works with Chinese law enforcement to drive away dredgers, he said.

Separately, Executive Yuan spokesman Ting Yi-ming （丁怡銘） said that officials are to discuss increasing penalties for illegal dredging to one to seven years in prison and a fine of up to NT$80 million （US$2.77 million）.

The proposal would amend the penal provisions of the Act on the Exclusive Economic Zone and the Continental Shelf of the Republic of China （中華民國專屬經濟海域及大陸礁層法） and the Sand and Gravel Excavation Act （土石採取法）, Ting said.

It would also require that confiscated ships or other machinery be promptly and properly auctioned, sold or otherwise disposed of, he said.

Article 18 of the exclusive economic zone act stipulates a prison term of up to five years and a fine of up to NT$50 million for those found guilty of intentionally harming natural resources or ecosystems.

Article 36 of the excavation act authorizes a fine of NT$1 million to NT$5 million for those found guilty of extracting sand or gravel without permission, and allows local governments to confiscate equipment.

Chinese ships used to primarily dredge for sand near Kinmen County, but over the past two years have moved closer to Matsu and waters southwest of Penghu County’s Cimei Township （七美） due to climate change effects, Lee said.

In the first nine months of this year, Taiwanese and Chinese patrol boats chased dredging vessels away from Matsu 12 times, he said.

To prevent such activity, Lee said that the council would continue building new ships and dispatching them to the two hotspot areas, with a 1,000-tonne vessel already having been sent to the waters near Matsu.

The council is also in talks with other agencies to build a naval wharf on Matsu to accommodate large vessels, he said.