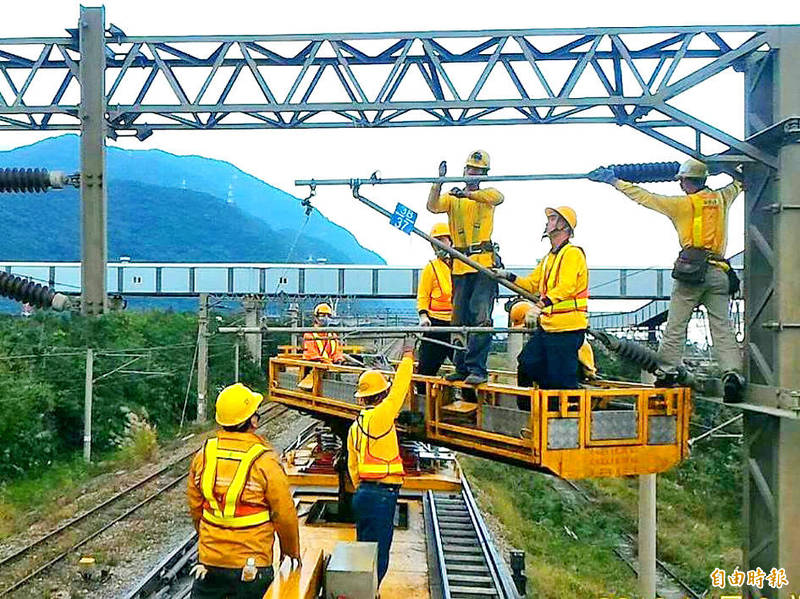 TRANSFORMATION: The rail operator is planning to reduce the number of diesel-powered trains on the line from 57 to 28 and upgrade Fangliao Station to tier 2

An electrified South Link Line is to officially begin operations on Dec. 23, which would reduce the estimated travel time between Kaohsiung and Taitung County by about 27 minutes, the Taiwan Railways Administration said yesterday.

The 123.4km-long line connecting Pingtung and Taitung counties was the last stretch of the nation’s railway system that had yet to be electrified. The government began electrifying the line in 2013, with the construction budget topping NT$27.613 billion （US$956.4 million）.

Six Puyuma Express services and four Tzuchiang Express services would be added to the line once it is fully electrified, raising transport capacity by 7 percent during weekdays and 13 percent on weekends.

The agency would not need to replace the Chukuang Express train’s electric locomotive with a diesel one at Fangliao or Taitung train stations anymore, it said.

Once the South Link Line is completely electrified, travel time between Kaohsiung and Hualien could be shortened by 39 minutes, the agency said.

Schedules along the line would be changed once the electrified services begin on Dec. 23, with the number of diesel-powered trains to be reduced from 57 to 28, the TRA said.

The updated schedule can be viewed online and at railway stations, the agency said.

Fangliao is to be upgraded to a tier-2 station, where Puyuma Express and Tzuchiang Express trains would stop, the agency said, adding that the station would also become a tourism transit hub in Pingtung County.