《TAIPEI TIMES》 Poll shows over half back license for CTi News 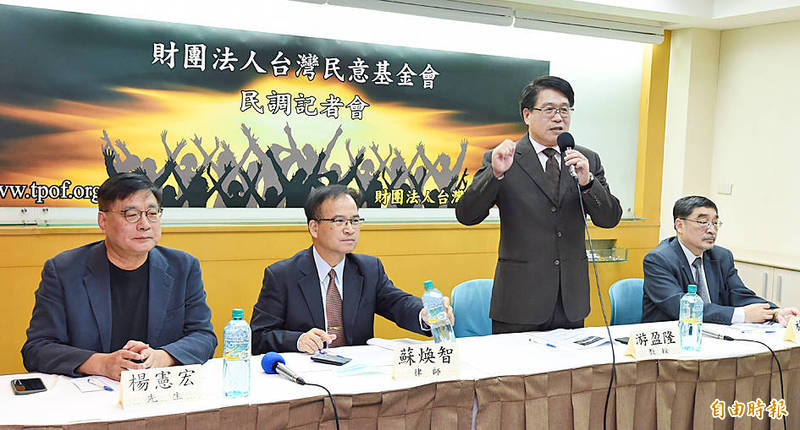 Another 15 percent either had “no opinion,” did not know or declined to answer, the foundation said.

Asked whether they believed that the National Communications Commission is an independent agency not influenced by politics, 31.5 percent of respondents said “not at all,” 35.5 percent said “not really,” 16.3 percent said “mostly” and 5.2 percent said “very much,” while 11.6 percent either had “no opinion,” did not know or declined to answer.

Given the complexities of CTi News having its license revoked, it would be a “disaster” if an administrative agency were to handle it as a “simple, administrative procedure,” foundation chairman Yu Ying-lung （游盈隆） told a news conference in Taipei.

If, in the end, the commission and President Tsai Ing-wen’s （蔡英文） administration decide to revoke the network’s license without a convincing reason, they would face a strong public backlash, the foundation said in its report.

Another 17.6 percent said they would “not be very happy” and 13.9 percent “not happy at all,” while 15.5 percent had “no opinion,” did not know or declined to answer, the foundation said.

Thirty-three percent of Taiwanese are “not very worried” and 20.6 percent are “not worried at all” that Taiwan-US relations would regress if former US vice president Joe Biden, the Democratic presidential nominee, were to win the election.

However, 26.6 percent of respondents are “somewhat worried” and 11.6 percent are “very worried.”

The foundation said that 8.3 percent of respondents had “no opinion,” did not know or declined to respond.

Asked which political party they support the most, 33.6 percent of respondents said the Democratic Progressive Party and 16.9 percent said the Chinese Nationalist Party （KMT）.

The Taiwan People’s Party and the New Power Party each had 5.8 percent, while the Taiwan Statebuilding Party had 4.4 percent, the survey showed.

Other political parties garnered a combined 2.3 percent of the survey responses, while 29.7 percent of respondents said they did not support a particular party, the foundation said.

The survey, which was conducted on Monday and Tuesday last week, collected 1,080 valid responses from adults in Taiwan aged 20 or older. It has a confidence level of 95 percent and a margin of error of 2.98 percentage points.