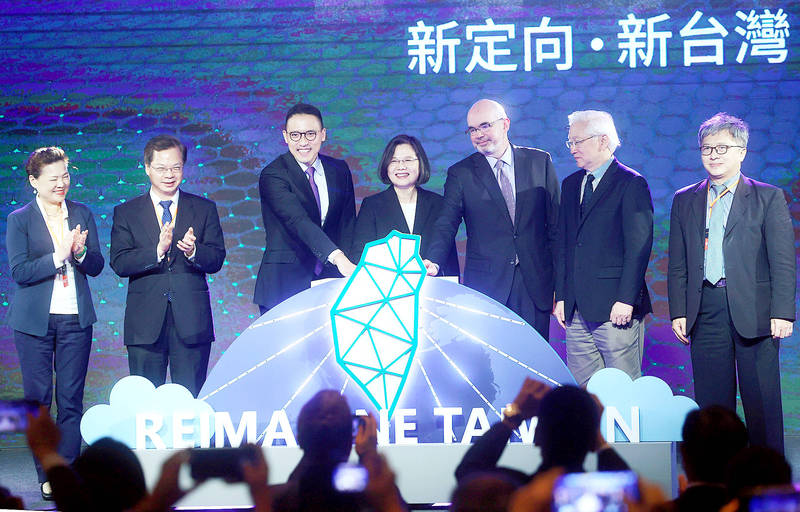 VISION: The US firm said it picked Taiwan as it has a complete hardware supply chain, abundant talent, a supportive government and shared sustainability goals

Microsoft Corp yesterday announced that it would build an Azure data center in Taiwan, and create a new team focused on the research and development of artificial intelligence （AI） hardware.

Describing it as the tech behemoth’s “biggest investment in Taiwan yet,” Sun said that Microsoft is “doubling down” on Taiwan due to the strength of local partners, a supportive government and conditions that align with its sustainability goals.

“We have been increasing our investment in Taiwan every year for the last five years,” Sun said. “And now we are making the biggest investment in Microsoft’s 30-plus-year history in Taiwan.”

“As the world’s supply chains are rapidly reforming in the wake of COVID-19, this is the most powerful moment for us to take our trade relations with the US to a new level,” Tsai said.

Viewing the collaboration as “an alliance of two strong partners,” Tsai said Taiwan and the US are on the way to creating “a global sales network, and building a new supply chain that will unlock enormous business potential.”

“Microsoft will build the first regional-grade data center in Taiwan, expand its cloud technology team, and let the world see Taiwan’s capabilities when it comes to research and development,” Tsai said, adding that the development of 5G, Internet of Things and AI would benefit as a result.

“For those who still do not know what I am talking about, here is the bottom line,” Tsai said. “Over the next few years, Microsoft is going to train more than 200,000 digital talents, create more than 30,000 jobs and create more than NT$300 billion [US$10.4 billion] in production value.”

Sun said the company chose Taiwan because of the completeness of the hardware supply chain and the “great supply of talents” in the nation.

Microsoft would be working with Taiwanese partners not just in the semiconductor and tech industries, but in finance, medical and other fields, he said.

“For AI and the cloud to maximize their potential we need to work across many industries,” Sun said.

He declined to specify where the new data center would be built, citing security concerns.

“Also, the cloud is everywhere,” he said.

An additional factor in Microsoft’s investment in Taiwan is the company’s commitment to the environment, Sun said.

“We made a pledge at the start of the year that Microsoft will have negative carbon emissions by the end of the year. By 2050, we want to remove our entire carbon footprint since we were founded in 1975,” Sun said.

“When we pick our location for investment, we made sure it is in line with our goals and we have structured the procurement of renewable energy into our plans,” he added.

Although Microsoft declined to put a dollar amount on the investment, a report by International Data Corp estimated that it would generate total revenue of US$10.4 billion from next year to 2024.

The report also expects 30,720 new jobs to be created, including 6,400 skilled information technology jobs, over the period.