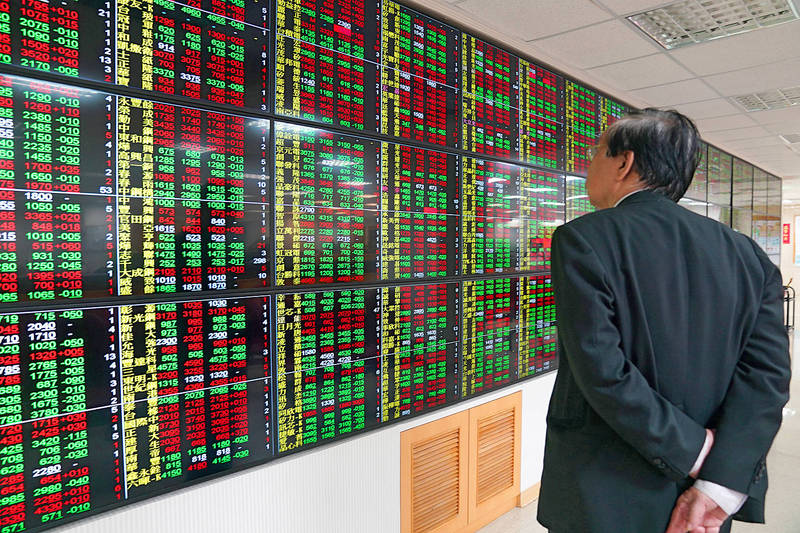 A man looks at an electronic stock board at a brokerage firm in Taipei yesterday. Odd-lot trading during regular trading hours became available yesterday. Photo: CNA

SMALL SLICE: Odd-lot traders favored the TSMC stock, as 4.31 million shares changed hands, but it was still a far cry from the 14.95 million shares traded on the regular board

Odd-lot trading enables investors to purchase any number of shares between one and 999, lower than the standard unit of trading, or 1,000 shares, thus lowering the threshold at which small investors can buy high-priced stocks.

Odd-lot traders yesterday bought a total of 4.31 million shares, or 94 shares per transaction on average, the data showed.

“It was no surprise that TSMC was popular among odd-lot traders,” TWSE trading division director Ben Chen （陳正斌） told the Taipei Times by telephone.

“Given that the firm’s share price has been hovering around NT$450 recently, many investors used to feel interested in the stock, but could not afford it, as they did not have NT$450,000 [for a standard unit of 1,000 shares]. Now, they can buy TSMC’s odd-lot shares for just several thousands of New Taiwan dollars,” Chen said.

TSMC’s 266,041 shares traded in the odd-lot trading mechanism were still much lower than the 14,958 units, or 14.95 million shares, that changed hands in regular trading yesterday, the data showed.

Shares of E.Sun Financial, Evergreen Marine and FocalTech are not pricey, and investors are interested in them due to their rosy business outlook or stable dividend payouts, Chen said.

Odd-lot investors favoring the Yuanta ETF could be attracted by the firm’s announcement earlier this month of a cash dividend of NT$1.6, he said.

Overall, the launch of the odd-lot intraday trading did not boost the TAIEX’s turnover considerably, as many investors still stayed on the sidelines, Chen said.

However, as the odd-lot intraday transaction of NT$363 million was more than double the NT$154 million made through odd-lot trades made in after-hours yesterday, it seems there is still room to attract new investors, he said.

The TAIEX closed slightly higher yesterday, even though the large-cap tech stocks that usually drive the market were mixed in reaction to the weak third-quarter results for Intel Corp’s data center group, dealers said.

Select old economy and financial stocks benefited from rotational buying, but turnover remained moderate amid caution ahead of the US presidential election, they said.