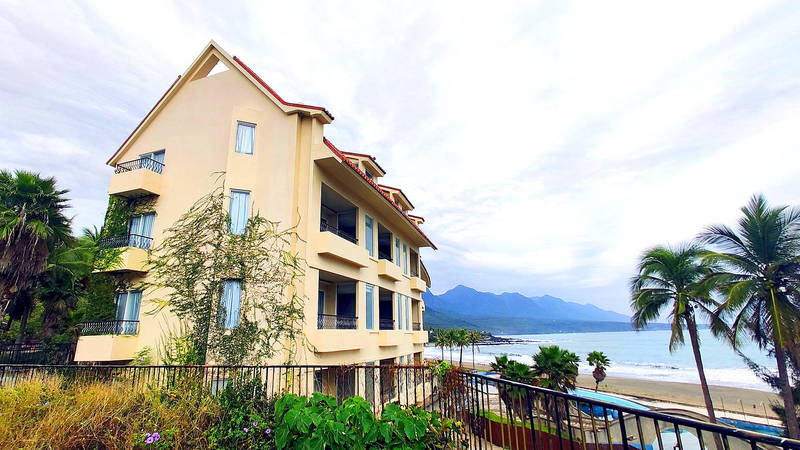 COMPENSATION DENIED: Locals and environmentalists cheered the news, but were divided on how to proceed, with some suggesting that the structure be demolished

An arbitration tribunal on Friday ordered the Taitung County Government to pay NT$629 million （US$21.75 million） to Miramar Resort Hotel Co （美麗灣公司） to take ownership of the company’s coastal resort as locals and environmental groups claimed partial victory in their more than a decade-long fight against the build-operate-transfer （BOT） project.

The resort was built on a beach at Shanyuan Bay （杉原灣） in the county’s Beinan Township （卑南）.

The payment is about half the NT$1.219 billion Miramar had demanded in compensation from the county government when it filed for arbitration in August 2018, in accordance with the Arbitration Act （仲裁法）.

Yao said the tribunal ruled that the county government had the legal authority to order the construction be halted in 2012 and that it had not contravened the original BOT agreement, as the situation was caused by “force majeure circumstances” and other uncontrollable factors.

The firm fought numerous legal battles against the county government, as well as a coalition of Aborigines and environmental groups.

Its executives said they filed for arbitration based on the BOT agreement signed in 2004 to build and operate the resort for 50 years before turning it over to the county government.

They said they sought compensation due to repeated delays in construction caused by demands to undergo environmental impact assessment （EIA） and other procedural setbacks, and financial losses resulting from not being able to operate the resort after completing its construction.

However, the tribunal ruled that the county government does not need to pay compensation, because the company undertook all of the phases of the project on its own volition, from the planning, design, construction and expansion to covering additional beach areas.

Therefore, the company needs to bear all of the expenses, as well as any operating losses, it said.

The tribunal ordered the company to turn over the resort’s buildings and facilities to the county government according to the terms in the agreement.

Yao said she would listen to people’s opinions on the matter.

County government officials are reportedly leaning toward preserving the resort’s buildings and facilities, and turning them into a public leisure park and a venue for international meetings.

Environmental advocates and local community members fighting the project claimed a partial victory, but were split on their suggestions, as some demanded that the resort be torn down to restore the beach.

Others sided with Taitung University professor Liu Chiung-hsi （劉炯錫） in agreeing with the county government that the resort was built legally under the BOT agreement and does not need to be demolished, except for an illegal expansion into the beach area.

Construction on the original 0.95 hectare site began in October 2005, but the company in April 2006 expanded the project to cover 6 hectares of public and private beach, triggering protests by residents and environmental groups, who called for an EIA and filed lawsuits.

The resort’s main structure was completed in March 2007 on land that was approved for use under the initial agreement, while the groups filed for litigation later that year, accusing the company of colluding with government officials for illegal benefits, along with theft of land and illegal dumping.