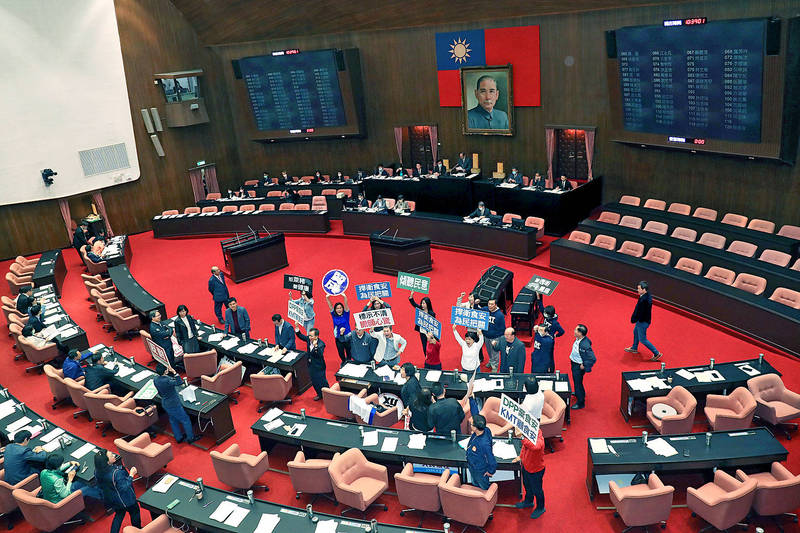 RACTOPAMINE: Opposition proposals calling for more research into the risks of consuming pork containing the additive did not make it to the legislative agenda

The Democratic Progressive Party （DPP）-controlled legislature yesterday blocked eight of the 11 proposals put forth by opposition parties to prevent or control imports of pork containing ractopamine residues from being placed on the legislative agenda.

The Chinese Nationalist Party （KMT） caucus presented four proposals, including a call to President Tsai Ing-wen （蔡英文） to attend a legislative question-and-answer session and to issue a public apology for easing the ban on meat containing the leanness-enhancing additive effective Jan. 1.

It also proposed that meat containing ractopamine or additives that enhance leanness be banned from daycare centers and kindergartens up to middle schools, and that the government submit proposed regulatory changes detailing penalties or fines for offenders and other measures within one month.

It further proposed that the government should commission another research report assessing the safety or risks of consuming meat with ractopamine, and continue to ban the imports of such meat until the report is completed.

All of the KMT’s proposals, except for the research report, were placed on the legislative agenda.

The Taiwan People’s Party also called for another risk assessment, to be conducted by the Executive Yuan, on Taiwanese consumption habits to serve as the base for establishing safety standards on permissible limits on residues of ractopamine and other leanness-enhancing additives for pork.

It also proposed that such pork imports should have their own commodity classification code.

The TPP also petitioned that a video recording of a closed-door meeting by the legislature’s Social Welfare and Environmental Hygiene Committee with food safety experts and the Ministry of Health and Welfare be made available.

Meanwhile, the New Power Party （NPP） proposed that the Ministry of Health and Welfare should forward its risk assessment reports to the ministry’s Food Safety Risk Assessment Advisory Committee to determine whether the conclusions are based on scientific facts.

Preventive measures should be mulled, and the minutes of these meetings and deliberations should be made public, it said.

The Executive Yuan should respect the decisions made by the Legislative Yuan in 2010 and 2012, and refrain from superseding them with an executive order, it added.

Packaging regulations should be amended, so packages reflect information regarding residues of ractopamine and other leanness-enhancing additives, giving customers freedom of choice when selecting meat products, the NPP said.

The Ministry of Economic Affairs and other agencies should assign separate and unique commodity classification codes for different kinds of pork products and whether they contain ractopamine or other additives, to ensure that such products can be traced, it added.

The TPP and NPP proposals were all voted down by the DPP, which holds 61 seats of the 113-seat legislature, despite protests by the KMT.

KMT Legislator Chiang Wan-an （蔣萬安） said that the names and results of the votes would be made public, so people would know who is putting the health of citizens at risk.

KMT caucus secretary-general Lin Yi-hua （林奕華） said that the ruling party’s complete disregard for the proposals is a demonstration of its arrogance and an abuse of the democratic system.

The public should not simply believe a risk assessment report that failed to follow proper procedures and had not been reviewed by a legislative committee, she added.