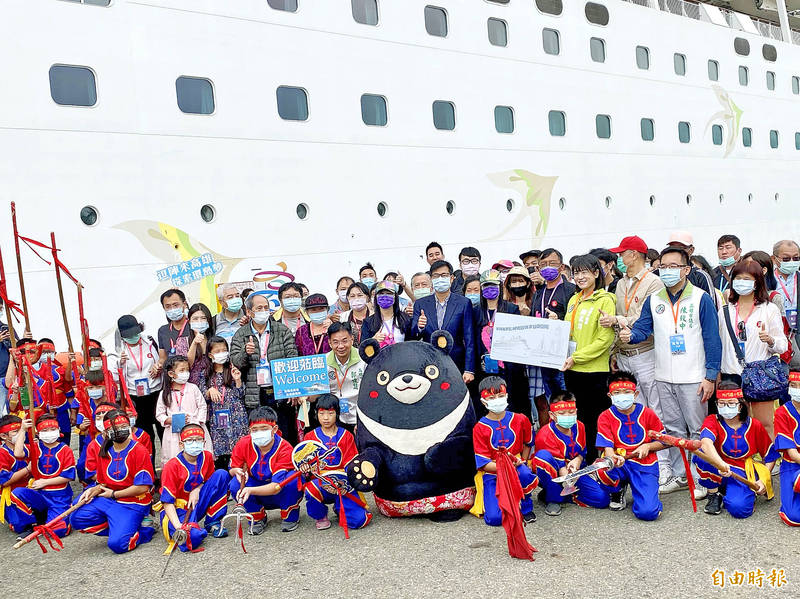 Kaohsiung Mayor Chen Chi-mai, standing behind a mascot, welcomes the passengers of a cruise ship sailing around Taiwan after it arrived in the city yesterday on the second day of the tour. Photo: Hung Chen-hung, Taipei Times

Taiwan’s first round-the-island cruise liner yesterday docked in Kaohsiung on a four-day voyage launched as part of the tourism industry’s efforts to boost domestic travel amid the COVID-19 pandemic.

Having embarked the previous day from the Port of Keelung with about 1,200 passengers, the Explorer Dream, operated by Genting Hong Kong （雲頂香港）, docked at Kaohsiung with plans to sail to Hualien.

Although the pandemic has greatly hampered travel around the world, the tour operator said that such voyages are being introduced amid a recovering local tourism industry, thanks in large part to the nation’s effective disease prevention efforts.

The maiden cruise was well-received, with 80 percent of the tickets having been sold, the tour operator said.

The vessel can accommodate 3,630 passengers, but the number was reduced so that social distancing and other disease prevention measures could be observed, it said.

The ship’s passengers must take precautions, such as wearing masks in public spaces and practicing social distancing when seated, it added.

Genting Cruise Lines said that the agricultural industry is being promoted in a special area aboard the ship, where 72 local products are available for sale and free samples are offered for more than 50 of them.

Lion Travel Service （雄獅旅行社）, which partners with the cruise line, said that seven voyages are to embark from Kaohsiung or Tainan, and that after Nov. 27, winter tours would be introduced, with at least one vessel embarking from Kaohsiung each month.

The voyages embarking from Kaohsiung would be four or five-day tours, and would be similarly priced to the Keelung tours, Lion Travel president Andy Yu （游國珍） said.

More tours are to be introduced if the market responds well, Yu added.

Each passenger spends about NT$2,500 each time the ship docks, so a considerable amount is added to local economies, he added.

A cruise ship circumnavigating Taiwan proper is moored in Kaoshiung yesterday, the second day of the trip. Photo: CNA