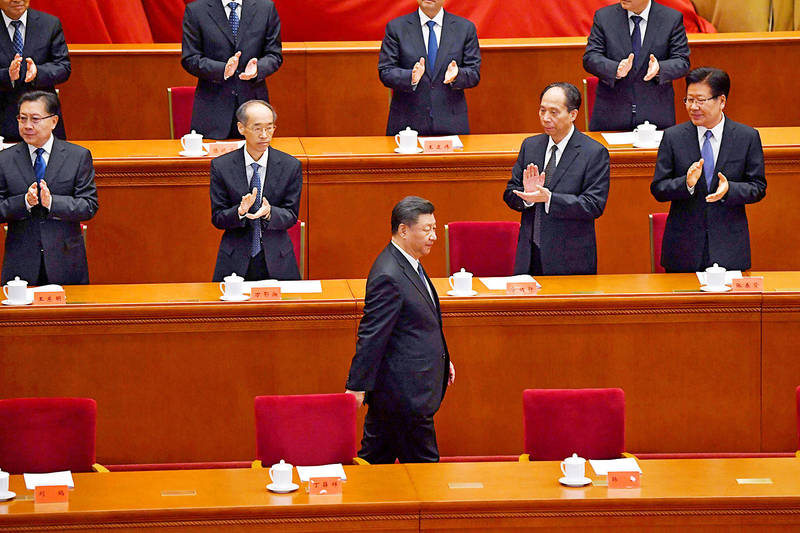 Chinese President Xi Jinping, front, is applauded yesterday as he arrives for a ceremony marking the 70th anniversary of China’s entry into the Korean War, in Beijing’s Great Hall of the People. Photo: AFP

‘SPIRIT OF WAR’: The speech coincides with the release of an action-thriller film depicting a band of Chinese soldiers fighting the US in the Korean War

Chinese President Xi Jinping （習近平） yesterday warned of China’s military resolve to defeat “invaders,” speaking on a 70th anniversary remembrance of the Korean War, the only time Chinese forces have fought the US.

In a long speech, heavy on patriotism and flecked by anecdotes of heroism by Chinese forces, Xi said that victory in the 1950 to 1953 conflict was a reminder that his nation stood ready to fight anyone “creating trouble ... on China’s doorstep.”

Beijing frequently uses war anniversaries to fire thinly covered warnings to the US of the military strength of the “new China.”

The Korean War is a key foundation story for the Chinese Communist Party.

The anniversary comes as the party is called out by US President Donald Trump, in a bitter row spanning trade, technology, human rights and Taiwan.

Without explicitly naming the US, Xi loaded up with the historical precedent of the Korean War and took swings at modern day “unilateralism, protectionism and extreme egoism.”

“Chinese people don’t create troubles, nor are we afraid of them,” Xi said to applause.

“We will never sit back and watch any damage to our national sovereignty ... and we will never allow any force to invade or divide the sacred territory of the motherland,” he said.

On Wednesday, the Pentagon announced it had agreed to sell more than US$1 billion dollars of missiles to Taiwan, the sharpest potential flashpoint with US forces.

The Korean War was the first and so far only time Chinese and US forces have engaged in large-scale direct combat.

According to the Chinese government, more than 197,000 Chinese soldiers died during the three-year war, which saw the US-led UN coalition pushed back to the 38th parallel bisecting the Korean Peninsula, after China weighed in on the side of North Korea’s communist army.

The war, essentially fought to a bloody stalemate, is hailed in China as a victory and an example of resilience and spirit against a more advanced foe.

“When China was very poor, it didn’t surrender to US pressure,” an editorial in the state-run Global Times said this week. “Today, China has grown to be a strong country, so there is no reason for China to fear the US threats and suppression.”

With tensions at their highest in decades between Beijing and Washington, China is making much of the 70th anniversary of its forces entering the fight, intended as much for domestic consumption as it is a warning to its superpower rivals.

Chinese state media have unleashed a wave of propaganda with daily interviews with Chinese veterans of the war during prime-time news over the past week.

An action-thriller Sacrifice, directed by three of the biggest names in Chinese cinema and depicting a small band of Chinese troops holding off US forces in the final days of the war, hit cinemas across the country yesterday.

“This should be seen as a message directly addressed to the United States, there is no ambiguity here,” Alice Ekman, an analyst specializing on China at the EU Institute for Security Studies said before the speech.

“Xi is invoking the spirit of war in a broad sense,” she said.

China and North Korea have worked to improve relations in the past two years after they deteriorated as Beijing backed a series of UN sanctions against Pyongyang over its nuclear activities.

Xi and North Korean leader Kim Jong-un have met five times since March 2018, even as nuclear negotiations between Washington and Pyongyang have hit a standstill.

“It’s to prepare for a possible limited military conflict with the US”, Shi said.