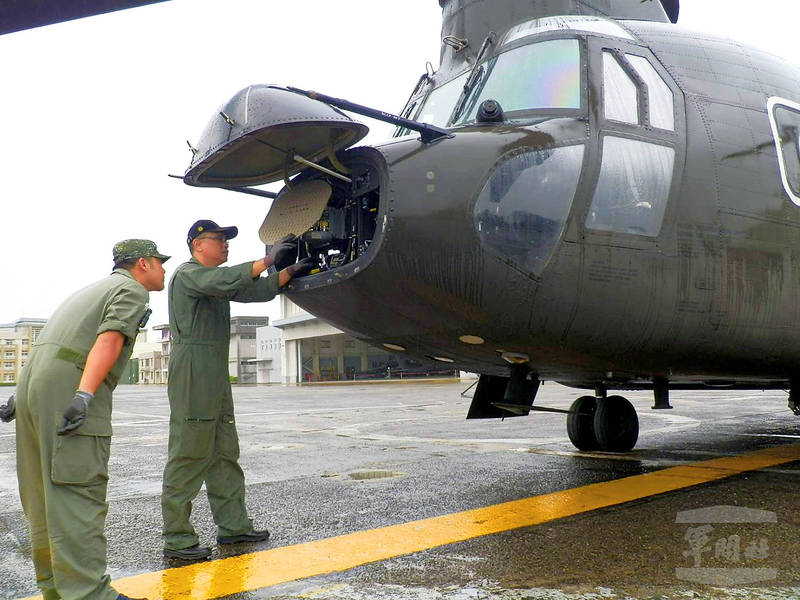 A handout provided yesterday by Military News Agency shows army mechanics working on a military plane at an undisclosed base in Taiwan on Oct. 8. Photo: EPA-EFE

HONING DEFENSES: The US Department of State said that land-attack missiles in particular would improve Taiwan’s ‘capability to meet current and future threats’

The US Department of State on Wednesday approved US$1.8 billion in new arms for Taiwan and submitted the package to the US Congress for a final review in a move aimed at improving Taiwan’s self-defense capabilities against a long-threatened invasion by China.

The package has 135 extended-range standoff land-attack missiles from Boeing Co valued at US$1 billion, US$436 million of high-mobility artillery rocket systems made by Lockheed Martin Corp and US$367 million in surveillance and reconnaissance sensors from Raytheon Technologies Corp to be mounted on aircraft.

The submission to Congress for a 30-day review, which is unlikely to draw opposition, comes two months after the US and Taiwan completed the sale of 66 new model F-16 Block 70 aircraft from Lockheed.

The Chinese Ministry of Foreign Affairs criticized the sale as “severe interference in China’s internal affairs” that would “undermine China’s sovereignty and security interests,” and vowed retaliation, including sanctions against the US companies involved.

In Taipei, the Presidential Office thanked the US for the sale.

“By providing us with these defensive weapons, the US is not only helping Taiwan strengthen and modernize our national defense capabilities, it is also increasing our asymmetric capabilities, making Taiwan more capable and confident of maintaining peace and stability in the Taiwan Strait and the region,” Presidential Office spokesman Xavier Chang （張惇涵） said in a statement.

This is the eighth arms sale package announced by US President Donald Trump’s administration, the Ministry of Foreign Affairs said in a news release yesterday, thanking Washington for backing its commitment to the US’ Taiwan Relations Act and former US president Ronald Reagan’s “six assurances” with concrete action.

“Taiwan will continue to deepen its security partnership with the US and help maintain the Indo-Pacific region’s peace, stability and prosperity,” the ministry said.

The Executive Yuan said in a statement that deepening economic cooperation between the US and Taiwan, as well as promoting supply chain restructuring, are among the government’s most important tasks.

The land-attack missiles in particular “will improve the recipient’s capability to meet current and future threats as it provides all-weather, day and night, precision attack capabilities against both moving and stationary targets,” the state department said.

The US has pushed back against Chinese pressure and two senior US officials, including US Undersecretary of State for Economic Growth, Energy and the Environment Keith Krach, have visited Taiwan since August in a show of support.

US Secretary of State Mike Pompeo said in an Oct. 9 interview on the Hugh Hewitt show that the “administration has been relentless in the work that we have done to make sure that the understandings that we’ve had between ourselves and China as they relate to Taiwan are delivered upon.”

“We are going to make sure that we live up to all of the obligations we have to Taiwan,” Pompeo added.