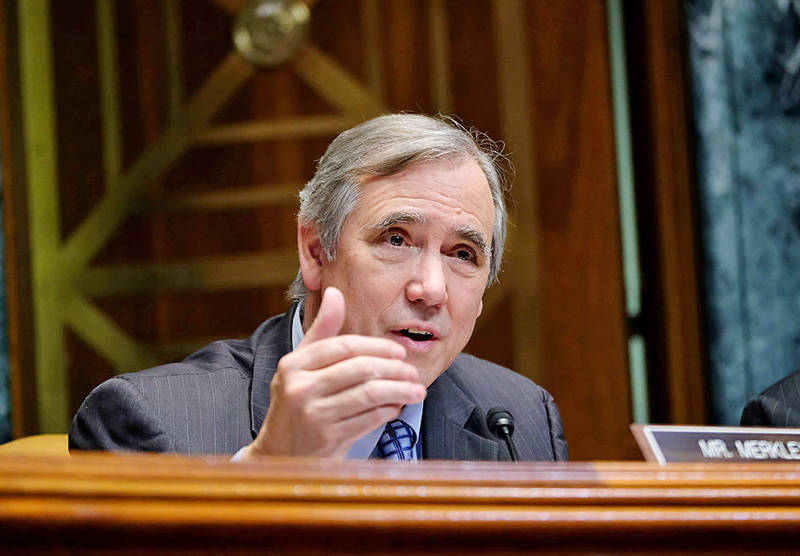 US Senator Jeff Merkley speaks at a Senate hearing on Capitol Hill in Washington on April 11 last year. Photo: AFP

The US House of Representatives’ China Task Force, launched by Republicans earlier this year, yesterday proposed the China task force act, a package of 137 pieces of legislation, seven of which involve Taiwan, in the hope of getting it passed before the 117th US Congress convenes on Jan. 3.

The act encompasses a wide range of issues, including combatting Beijing’s influence around the globe, establishing the US’ dominance in determining 5G network standards and means for bringing UN members to task for abusing their influence within the UN system.

The seven acts involving Taiwan address concerns such as the Taiwan Assurance Act reaffirming the regular sale of arms to Taiwan and supporting its meaningful participation in the UN and other international bodies, while the Taiwan defense act ensures that the US military has the capabilities to block Chinese Communist Party （CCP） aggression.

If passed, the Taiwan symbols of sovereignty act would allow Taiwanese to openly wave national flags on US soil and wear official uniforms carrying representations of the flag, while the Taiwan non-discrimination act would serve as a legal basis for helping Taiwan to join the IMF and the employment fairness for Taiwan act would encourage global financial institutions to hire Taiwanese on a fair basis.

The Taiwan fellowship act directs the US Department of State to establish a program to provide two-year fellowships in Taiwan to qualified US government employees, while the Taiwan relations reinforcement act, introduced by US senators Marco Rubio and Jeff Merkley, includes the establishment of an interagency Taiwan policy task force.

The acts also include House Resolution 353, a bill directing the US secretary of state to develop a strategy for Taiwan to regain observer status in the WHO.

The China Task Force said that two-thirds of the acts bundled under the China task force act have received bipartisan support, while the remaining one-third had either passed the Congress or the Senate.

US Representative Michael McCaul, chairman of the task force, said that Beijing’s malign behavior constitutes a threat that the US cannot ignore.

“The malign behavior of the CCP poses a generational threat that demands urgent action. We can no longer stand back as the Chinese Communist Party ramps up their military aggression, weaponizes the supply chain and brazenly attacks the democratic values that underpin American society and global prosperity,” McCaul said.

House Minority Leader Kevin McCarthy, when announcing the act, said: “Today marks another milestone in our efforts to hold China accountable — the introduction of the China task force act will help us implement the recommendations of the report, which will help make our country safer and more self-sufficient.”

Ministry of Foreign Affairs spokeswoman Joanne Ou （歐江安） said that the ministry thanked the US Congress for advancing concrete measures in support of Taiwan, and for giving significant weight to the issue of regional peace and stability across the Taiwan Strait.

The ministry would keep in close contact with the US Congress and its administrative branch to further foster Taiwan-US relations, Ou said.