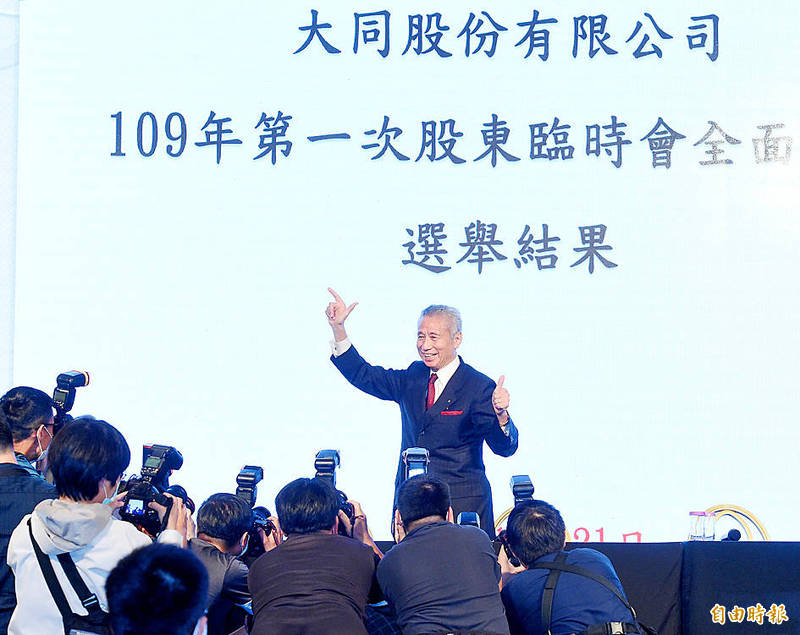 UNRESOLVED SAGA: Elected investors vowed to ‘make Tatung prosperous for the next century,’ but the FSC is still probing the issue of Chinese influence

With approval from the Ministry of Economic Affairs, institutional shareholders held the special meeting to elect new board members, nearly four months after Tatung deprived 27 investors owning a combined 53 percent stake in the firm of their voting rights at a shareholders’ meeting on June 30.

Shareholders with a combined 92.34 percent stake, or 2.03 billion shares, showed up to vote or had placed their ballots via an electronic voting platform operated by Taiwan Depository and Clearing Corp （台灣集保）, said Hsin Tung Investment Consultancy Co （欣同） chairman Lin Hung-hsin （林宏信）, who chaired the meeting.

The firm is to hold an extraordinary board meeting on Wednesday next week at the earliest to elect a new chair, Wang Kuang-hsiang told a news conference yesterday.

“We will support Lin Wen-yuan as the new chairman and hope to make Tatung prosperous for the next century,” Wang said.

Lin Kuo, who took over as chairwoman in February 2018 when her husband, Lin Wei-shan （林蔚山）, stepped down over a corporate scandal, feared institutional investors might sell the firm’s properties, while the board election was held under unresolved suspicions of Chinese involvement.

“I will continue to protect Tatung as a matter of Taiwanese national security,” Lin Kuo said.

Stephen Wu （吳志光）, a lawyer at Lee and Li Attorneys-at-Law （理律法律事務所）, said that her decision to stay on the board was unusual.

Many in such a scenario would concentrate on winning the independent director seats, as they can curb bad decisions proposed by a rival party, he said.

“It seems that Lin Kuo has decided to fight until the last minute ... staying on the board might enable her to do something more if the FSC [Financial Supervisory Commission] finds signs of Chinese influence in the firm again,” Wu said.

The Securities and Futures Investors Protection Center is to continue its lawsuit against Lin Kuo, even though company shareholders elected a new board, and if the agency wins, Lin Kuo would be barred from serving on the board.