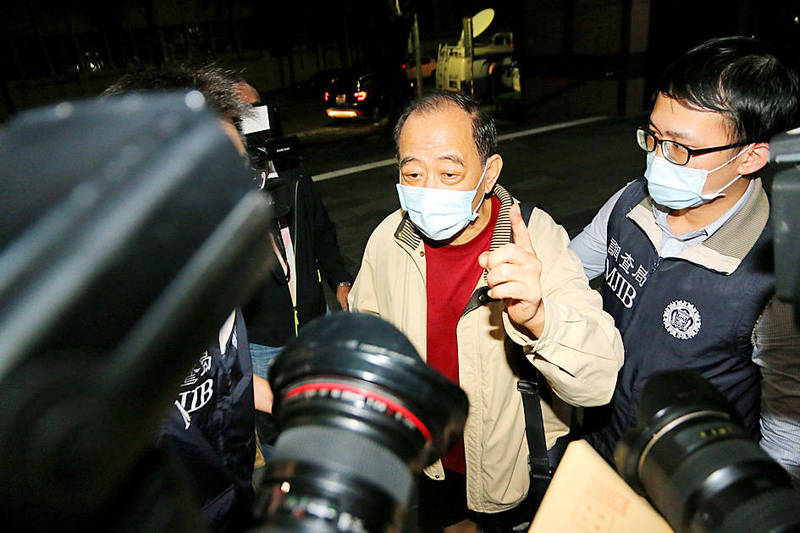 ONGOING PROBE: A former Military Intelligence Bureau colonel, major general and another colonel, as well as five other people, have been questioned by prosecutors

The Taipei District Court yesterday ordered that a retired colonel from the Military Intelligence Bureau （MIB） calling himself Taiwan’s “first special agent” be detained and held incommunicado as part of an ongoing investigation into espionage allegations targeting at least three former bureau officials.

Prosecutors told the court that detaining Chang was necessary because of the seriousness of the crimes, and the possibility that the suspect could collude to destroy evidence or flee the country.

Also yesterday, two other former MIB officials — major general Yueh Chih-chung （岳志忠） and colonel Chou Tien-tzu （周天慈） — were released after each posting bail of NT$150,000 following questioning by prosecutors over their alleged involvement in the case.

Chang, Yueh and Chou were summoned for questioning on Tuesday night, hours after their residences were raided by investigators as part of an ongoing probe of the case.

Five other people were also summoned as witnesses on the same day.

Chang told reporters before he went into the prosecutors’ office that he is innocent of all charges.

He said that he was an acclaimed Taiwanese spy, the first intelligence worker sent to China and the only one at the Tiananmen Square Massacre.

Chang accompanied Fu on the trip and introduced him to Chinese national security personnel, prosecutors said.

Chang and Chou are also accused of taking Yueh to China from 2016 to 2018, and another MIB colonel surnamed Wang （王） in 2016 and 2017, to meet with national security officials, prosecutors said.

Yueh also allegedly went to China alone to meet with national security personnel and was entrusted by Chou to deliver documents, prosecutors said.