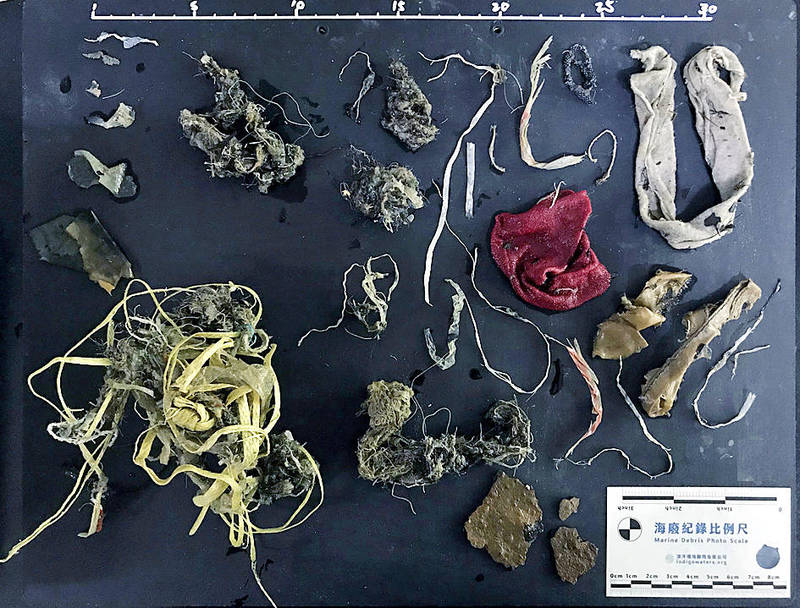 Debris found during a survey of the seabed near the mouth of the Tamsui River in New Taipei City is pictured in an undated photograph. Photo: CNA

Seabed waste off the west coast is 1.5 times higher than the global average, with the mouth of the Tamsui River （淡水河） nearly 90 times dirtier, the environmental consultancy IndigoWaters （澄洋環境顧問） said yesterday.

The firm in September last year began collaborating with local oceanographers on Taiwan’s first survey of seabed waste off the west coast, collecting 6,000 samples from near the mouths of eight rivers and conducting 215 inspections.

Of the samples, 83.3 percent were found to contain trash, the group said.

Based on the survey, every square kilometer of seabed had about 121,074 pieces of trash weighing 102kg, IndigoWaters chief executive Yen Ning （顏寧） said.

This is considerably higher than in the waters near neighboring countries, as Tokyo Bay has an average of 66.6kg per 1km2, the ocean off South Korea has 31kg to 73kg and China has 15.9kg, she said.

The results are particularly concerning near the Tamsui River, where every square kilometer of seabed has on average 2.68 million pieces of trash weighing 6,292kg, nearly 90 times the global average weight, the group said.

Previous research has shown that 94 percent of all ocean waste falls to the seabed, but it is not distributed evenly throughout the oceans, IndigoWaters said.

Every square kilometer of the ocean floor has 70kg of trash on average, but this weight is mostly concentrated in coastal areas, it said.

Waste poses a threat to the benthic ecology, especially fish and shrimp that feed on organisms that live on the ocean floor, said Fang Lee-shing （方力行）, a professor at National Sun Yat-sen and Cheng Shiu universities who collaborated on the survey.

As the waters off western Taiwan are important for fishing, it is urgent to understand the state of seabed pollution in the area, he added.

Although this trash is in a place humans cannot easily see, “it will definitely come back to haunt us,” Fang said.

The survey showed that nearly 60 percent of the waste is fibrous, likely from fishing nets and woven bags such as those used for rice and animal feed, while 30 percent is plastic.

Bacteria, algae and other organisms cling to fishing nets and other fibrous material, which eventually sink to the ocean floor as they are denser than water, Fang said.

Another 30 percent of the waste was plastic film, which had probably been used for packaging, IndigoWaters said.

Ocean Conservation Administration statistics show that last year, nearly 60 tonnes of fishing nets were cleared from off the west coast, comprising the greatest proportion of all ocean waste cleared.

Taiwan is a pollution hotspot in East Asia, Yen said, adding that the nation should start monitoring as soon as possible to identify and deal with problem areas.